She’s dated some high-profile men, but Mollie King admits getting over break ups is really hard and requires ‘time out’.

Speaking exclusively to Cosmopolitan she states: “It’s really hard when it’s fresh; you can’t go from being in love to friends overnight. I’ve always had to take time apart after a break-up. When they’re with somebody new and you’re single that really hurts, but it’s easier when you move on.”

She added: “Recently there were some pictures of me and David [Gandy, her ex-boyfriend] sat next to one another at the same tennis match and the pictures could not have been more unfortunate. It looked like we hated each other, but we do actually get on. Just as I do with Andy [Brown, from Lawson]. I’ve stayed friends with all my ex-boyfriends, which is nice because we often bump into each other at events.”

Commenting further on her love life, she reveals having a long-distance relationship with American record producer, Jordan Omley, can be challenging: “It sounds glamorous and showbiz, but it can be tough at times because you want to come home to one another and snuggle on the couch.”

It seems Molly msy have found mister right this time. She added: “He’s different from guys I’ve been out with before. I’m really happy; he’s definitely ticking all the boxes. He looks after me… I can be quite high-maintenance as a girlfriend. But I’ve learnt to be more laid-back in relationships.”

She’s even dreaming of her big day: “My big sister got married last year and it was such an emotional day… I couldn’t help but think of my own wedding and that it would be quite similar, because there would be a lot of the same family there. One day – and one day only – I’ll look like a princess, hopefully.” 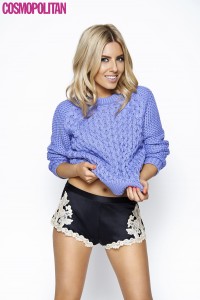 Even though her bandmates are new mums, she’s not broody yet: “I’ve been to the hospital each time after Una, Rochelle and Frankie gave birth. The babies were literally a few hours old when I saw each of them. Aoife [Una’s daughter] is a year and a half now and it’s amazing seeing her grow up. It totally changes your life and I have the best of both worlds – I can play auntie but not have to do all the nappy changing! One day I’d like to have loads of kids, but I’m not quite ready for it yet.”

“I studied fashion at A level and it’s something I love learning about. I’ve always had a strong opinion on clothes. I know straight away if I like something or not and how it could work… [Victoria Beckham is] an absolute legend. I saw her at a fashion event and I really wanted to ‘fangirl’ her and get a picture but I was too scared. If I’m on the front row of a show and someone like her walks in, I get so excited and can’t stop staring. I think, ‘Oh my god, I need to remember this feeling because I won’t be doing this forever.’ One day when I’m a granny, I want to remember how cool it is!”

Despite featuring in pretty much every ‘world’s sexiest women’ list going, Mollie admits to having body hang-ups, but knows how to work her best bits:

“I don’t have a Kim Kardashian bum unfortunately, and I don’t have massive boobs either. You have to work with the bits you’re most proud of, so if I’m going out I always think, ‘Right, Molls, your legs are better than your cleavage, so go work those.’ I’m not that curvy, so I like to wear things that give me more shape than I’ve got. Everyone has their body hang-ups; I think, ‘Oh, I could tone that,’ or, ‘I wish I could change that.’ But as much as you can tone bits or add bits, you’re born with your body.” 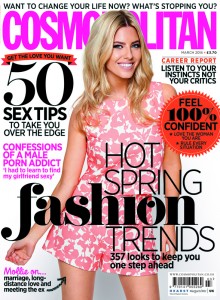 The full interview appears in the March 2014 issue of Cosmopolitan, on sale 30th January