Following in a long line of prestigious Future Music winners, Heidi Browne from Market Drayton, Shropshire has been named as the winner of the national Open Mic UK competition at The NEC in Birmingham!

Heidi was crowned champion in front of a capacity crowd at The NEC in Birmingham on Saturday night taking home a recording and development deal. Her own original song G.I.R.L.F.R.I.E.N.D won over the judges making her the winner of the 21 and over age category and the overall winner of Open Mic UK 2014.

The competition is brought to you by Future Music – the company behind the discovery of artists such as Jacob Banks, Warner Music’s Birdy, Columbia Record’s Lucy Spraggan, Union J’s Jaymi Hensley and Jahmene Douglas, both of which are now signed to Sony Music, and last year’s TeenStar winner Luke Friend!
After impressing the judging panel at auditions from against more than 9,000 acts who signed up to Open Mic UK this year across the UK, they went on to perform in the Open Mic UK live showcases, battling through both Regional and Area final heats.

The judging panel for the Grand Final included record label representatives from Sony, Warner and Universal with names such as four time Ivor Novello Award winner Mark Hill, Birdy’s producer Gareth Henderson, Alex Baker from Kerrang Radio plus DJs who work for BBC introducing and Capital FM radio, along with Head of Future Music Chris Grayston. Also picked by the judging panel as winners were Natalie Shay from New Southgate in London, who won the under 16’s age category, and Wildwood Kin from Torquay in Devon who took home the title for the 17-20 year old age category. 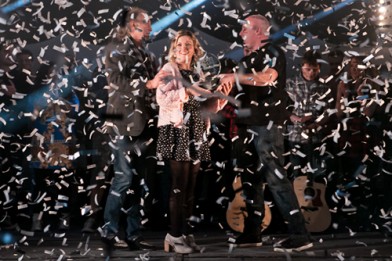 This year’s winner Heidi, says on the Open Mic UK competition experience; ‘’I entered the competition for a bit of exposure. I never thought I’d be successful as a quirky singer-songwriter! Winning the competition has restored my faith in what I’ve been doing for so long and I’ve been overwhelmed by the support of my fans, friends and family.’
Heidi has now won a comprehensive consultation package including social marketing, image and branding with Future Music, an initial extensive winner’s publicity package, a Lewitt microphone courtesy of John Hornby Skewes & Co. and an amazing £5,000 to spend on the development of her music.

For more information on Heidi follow her on http://www.heidibrowne.co.uk/. Heidi has proved herself to be best of the lot! For your chance to do the same, enter for 2014 now at www.openmicuk.co.uk.

Future Music is also about to start auditions for TeenStar Competition, after Luke Friend took the title in its first year. It’s not too late to enter and audition in the coming weeks. To find out more and enter the TeenStar now go to www.teenstarcompetition.co.uk.