One of the UK’s most exciting new boy bands M.A.D ‘Michael, Ab and Dan’ are unleashing a new single Fame & TV on to their ever growing fans, and they are going MAD for it!

Their last single, Toy Boy, hit the UK Top 40 chart without ANY promotion , any radio airplay, through social media fan power only. A feat unheard of. Until now.

Michael, 16 from Belfast, Ab, 18 from West Sussex, and Dan, 17 from Bridgend have been holed up in the studio for the last three months working non stop for their fans. Christmas cancelled, birthdays postponed. Three boys with a passion, a mission to inspire a generation.

Having had the most successful live-streamed event worldwide on social media platform YouNow, they represent their generation, those that are more dialed in to a Trend (of which they have trended No.1 28 times in the UK on Twitter) than suiting the demands of a radio playlist or record company executive. They are a band that exists for their fans.

Roll up 2014, and new single Fame & TV is the perfect pop track aimed at tackling head on the throwaway pop culture that has engulfed us all, our lost youth stolen by the onset of reality TV.

Working with production team Audio Freaks (also known as Soul Shaker who have worked with the likes of Keri Hilson) and Jack Vasouilli (who has worked with Rihanna, Pixie Lott, Emeli Sande and Pro Green), they have created a guitar and synth driven sound that is on the charm offensive – though has a cheeky pop at a certain Simon.

With a guest rap by Ghanaian/UK based Hip Hop artist and producer, Kobi Onyame, who has played Glastonbury and opened for the likes of Kanye West and Kano, the upcoming music video directed by Jack Uddin will see the boys appear in numerous reality TV shows across the years – with a few cameos thrown in for good measure.

Coinciding with the release, the boys will also be touring next month with special support by Australian YouTube sensation Jamie’s World. 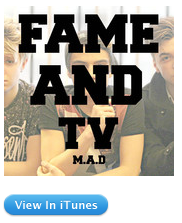