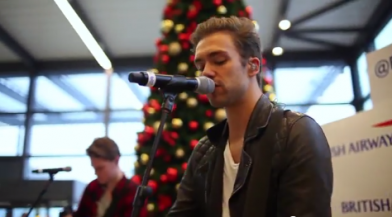 The band appeared to be a group of travellers checking in for a flight before they stopped real customers in their tracks by launching into their first ever airport gig.

The group gave star performances of some of their hits ‘Standing In The Dark’, ‘Juliet’, ‘When She Was Mine’, ‘Learning to Love Again’ and festive favourite ‘Driving Home for Christmas’

Lawson front man, Andy Brown said; “It was great seeing the surprise and excitement on people’s faces as we started to perform. We have done lots of gigs in our time but this was really special.”