‘Christmas, With Love’ is a selection of seasonal classics and original material. Packed full of fun and festivity with a Motown vibe throughout, this delivers the sound of Christmas 2013 in one perfect package. This is the 4th studio album from global singing sensation Leona Lewis who already has some 20 million album and single sales under her belt.

‘One More Sleep’ (Richard ‘Biff’ Stannard, Iain James, Jez Ashurst, Bradford Ellis, Leona Lewis) is the album’s lead track and will be released on December 1st. The song is festively infectious and it is a surefire Christmas classic that will be played on the airwaves for many many years to come. It is a timeless hit that will be the soundtrack to countless Christmas trees being decorated, stockings being hung and chestnuts roasted on open fires; this is Christmas encapsulated. Fun and jaunty with a Motown vibe, ‘One More Sleep’ instantly brings alive the true sense of fun and excitement that Christmas evokes in us all. 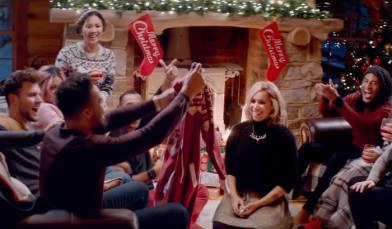 The album was produced by Biff Stannard and Ash Howes who need little introduction as the team behind hit tracks for the likes of Kylie Minogue, U2, The Spice Girls and Will Young to name but a few.

This is a collection of tracks interpreted in Leona’s own unique way with a Motown mood consistent throughout. It will no doubt provide the perfect soundtrack on a cold night, decorating the tree next to a cosy fire, with that special Christmas magic abound.

Leona said, “This has been such a busy year for me having been on tour, shooting my first movie and being in the studio. But I cannot wait to get out there this Christmas and perform these songs. I had such fun recording this record and that really comes through in the songs. I am looking forward to spreading a little Christmas cheer!”

The delicate tones of ‘O Holy Night’ will be recognisable to fans, who have come to know it as a festive favourite of Leona’s, having performed it live many times at Christmas shows.

‘Ave Maria’ is delivered in spine-tingling perfection as Leona reminds us once again why she places in the vocal elite. It is a special moment for her voice to be heard in such grandeur.

Elsewhere there is the moving rendition of ‘Silent Night’ with echoing harmonies and Leona’s take on the boisterous and bold classic ‘I Wish It Could Be Christmas Everyday’.

Needless to say that there is something for everyone in this immaculate Christmas package. Leona delivers the perfect gift-wrapped stocking filler this Christmas.