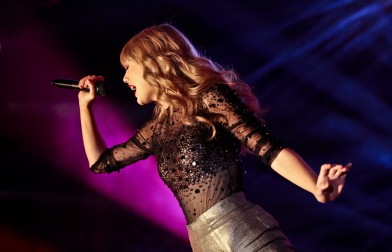 Tickets for the first four dates of the UK leg of Taylor Swift’s blockbuster The Red Tour sold out within hours of going on sale on Friday 4th October.

Due to popular demand seven-time Grammy winner Taylor Swift announces today that she will be adding a fifth date to the UK leg of The Red Tour next year.

Tickets will be available to purchase from 9am on Tuesday 8th October via axs.com, ticketmaster.co.uk, gigsandtours.com and by phone on 08448 24 48 24. Exclusive VIP Experiences and packages are also available.

Taylor Swift also confirms today that UK pop band The Vamps will be supporting her for all five shows at The O2 London next year. This news comes hot off the heels of The Vamps securing the number two slot on the UK singles charts with their debut single ‘Can We Dance’.

Taylor, dubbed ‘a true arena-rock goddess’ by Rolling Stone and a ‘rare talent’ by The Times, recently wrapped up the US leg of The Red Tour. The North American portion of The Red Tour saw Taylor play to more than 1.36 million fans over 66 shows (including 13 stadium stops) in 47 cities in 29 states and 3 provinces. This November will see Taylor take The Red Tour to Australia and New Zealand, where she will become the first solo female artist in 20 years to undertake a national stadium tour of Australia, with the last being Madonna’s Girlie Show tour in 1993.