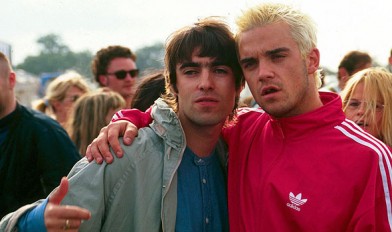 Liam Gallagher has used a Radio interview to tell us what he really thinks about one time friend & enemy Robbie Williams branding him a ‘fat f***ing idiot’ on air.

reignited his feud with Robbie Williams branding the pop star a “fat idiot” who doesn’t deserve to be playing stadiums.

The former Oasis front man is fuming about |Robbie being able to play at the home of Manchester City, the Etihad Stadium and believes his band should be playing that gig.

Speaking to radio 5 Live, he said: “We should be playing the Etihad three nights (sic), not some f***ing fat f***ing idiot.

“It could be any f***ing clown. I think it’s a shame that he’s doing three nights and a band like us are doing one night in The Ritz. Poor. It’s not about him, it’s people in general. But it is about f***ing him, just in case you think I’m scared or something.”

Talking about the gig he Played at The Ritz in Manchester on Wednesday night, Liam said: “It’s a small gig. Beady Eye ain’t a big band.

“Everyone thinks we’re going to announce big f***ing stadiums. That is the level we’re at and we’ll stay at that until you pull your f***ing finger out and buy the f***ing records. Beady Eye are a proper live band but the bulls**t is winning.”

Once good friends Liam and Robbie have been having a public feud since the 1995 Glastonbury festival where things turned sour around the time Robbie left Take That.  Noel famously branded Robbie “that fat dancer from Take That”.

Robbie didn’t let it lie and hit back by sending a wreath to Oasis when he beat their Knebworth record by selling out a third night.

In 2000 the feud hit new heights after Robbie challenged Liam to a televised boxing match for £100,000 while collecting a Brit Award as a solo artist.

Take note One Direction and the Wanted, this is how it’s done!