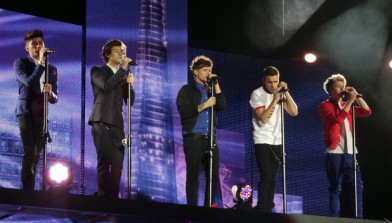 Songwriter Wayne Hector has been working on One Direction’s new album and in recent interview revealed some more info about 1D’s third installant.

Speaking to Digital Spy, Hector reveals: “They’ve definitely gone for a more mature sound,” he says of the record. “It’s still fun, but there are some really cool vibes coming from it. With this album, there’s definitely a shift. I think it’ll be really good. Hopefully there will be some good surprises on it. It’s coming out at Christmas so we’re almost finished on it.”

Hector feels no shame working with boybands: “There’s this horrid idea that it’s embarrassing to be in a boyband because you often don’t write your own songs and that somehow doesn’t make you credible.

“Elvis never wrote his own stuff but he was an incredible artist. Whitney Houston as well… there are so many. Of course there are legends out there who did, but not everyone is capable of that greatness on their own. I say that success is credible. People love or hate boybands, but they’re a massive part of people’s childhood memories and because of that it’s just as relevant as anything else.”