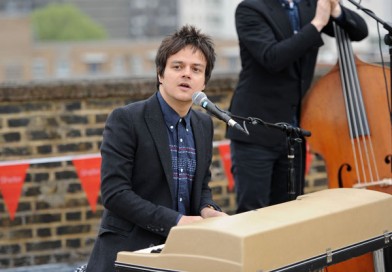 Jamie Cullum surprised commuters yesterday morning with an impromptu gig in the middle of rush hour at St Pancras Station.

He played five songs from his new album ‘Momentum’ and was joined by 13 members of The National Youth Jazz Orchestra who provided a superb brass band backing to ‘When I Get Famous’ and ‘Get Your Way’. 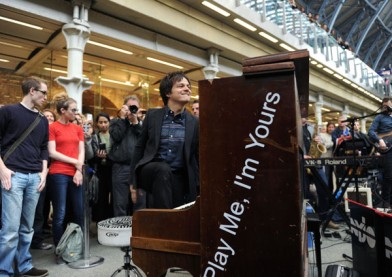 Jamie joked with the audience of commuters saying, “your not in a rush to get anywhere are you?” in between an electrifying performance of his new material that had him standing up on top of the piano. Mark Armstrong the artistic and music director for the National Youth Jazz Orchestra said, “Playing with Jamie has been a fantastic experience. It was a great mix between busking and written music as we went along, which just shows you what Jazz is all about.”

Jamie also later performed at housing and homelessness charity Shelter yesterday, being the first artist to perform on the roof of their London HQ. The show was streamed live online at www.shelter.org.uk/jamiecullum 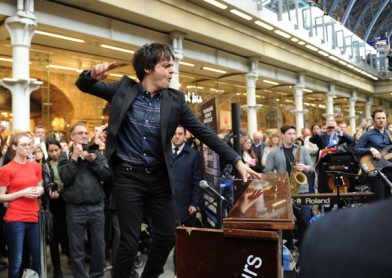 The day then finished with Jamie playing an exclusive show for a small audience of invited guests at The Shard, London. He played a mixture of tracks from his new album as well as some favourites from previous records to the backdrop of a south London sunset. Celebrity guests that joined Jamie in celebrating the release of his new album included Tinie Tempah, Jordan (Rizzle Kicks), Alan Carr, Amber Le Bon, Eliza Doolittle, Jade Parfitt and McLaren boss Ron Dennis.

Jamie’s new album ‘Momentum’ is out through Island Records now.