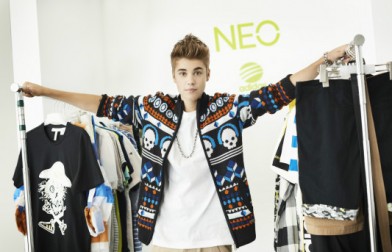 Justin Bieber has teamed up with global brand Adidas as the as official “new face” for Adidas NEO Label.As NEO’s new global style icon, Justin Bieber will inspire young consumers with the label’s stylish and fresh teen looks through a two-year partnership until end-2014. As well as sporting his favourite NEO looks, Justin will make appearances for the label in its major markets throughout 2013 and share its latest news and collections through his vast social media reach.

He will front NEO’s seasonal campaigns under its “Live Your Style” positioning, with Spring/Summer 2013 to debut in February. Teens will be able to shop for his favourite NEO looks and personally selected styles for each season.

Talking about the news, Justin Bieber spoke of NEO, the newest addition to a brand he has always loved. “I found a real connection with NEO because it is about fashion, freedom and being true to who you are. With my new album, ‘Believe’, I am spreading the message of believing in yourself. The first step is showing who you are, and one of the great ways to showcase yourself is through fashion. For me style is an adventure,
something to have fun with and NEO believes this too.” he said.