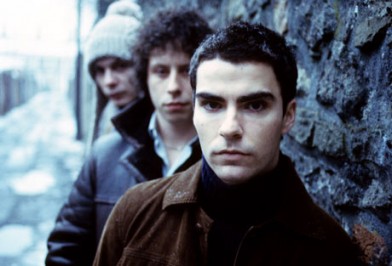 I remembered when you guys got signed to the V2 label there was a lot of noise about the first band signed to Branson’s new label. What were things like leading up to this event for a young unsigned band like you?
Stuart – We had a lot of shitty little jobs just to get the money together so we could go and play in London 3 – 5 times a month. We played pubs and places where we thought record deals were to be had, sometimes playing to 4 people but we were totally fu***ng wrong.

Did you have good management at the time?
Stuart – We didn’t have a manager, we tried to do it all ourselves. We never really thought about it at the time, but now it seems like the obvious thing we should have had. We used to do all the posters, phone calls, tape sending ourselves. Kelly – We never trusted anyone else, and if we didn’t do it nothing would get done. The strange thing is we thought that London would be the place to get noticed, instead we were spotted in our hometown. Two weeks prior to this we were seen at the Borderline in London by the two guys who produced our album, they offered to do a demo for us. We thought it was just another con but it turned out good and started the ball rolling. We even changed the name of the band the same weekend.

What were you called before?
Stuart – The Tragic Love Company – we were basically a cover band doing 70’s stuff. It’s ironic really, all these years we’ve been doing this shit and then suddenly it all comes together in your back yard. I was about 15 Kelly was about 12, I had a drum kit and he had a guitar and his dad had a garage. That was about ten years ago. We new Richard from school and we used to hang around with him. Believe it or not he didn’t play bass until a year ago. We had a break from the band for a bout six months, then when we got back together we decided to get Richard in on the act, mainly because he was the coolest c**t in the village. We did have another bass player but he went on holiday for two weeks. Richard had a go on the bass and we noticed that he hit all the strings at the same time instead of individually making a three piece band sound like a four piece!

Richard, can you read music?
Richard – No, just a bit of Tab and by listening to Kelly playing guitar I pick up a few techniques.

Kelly – We were always told by my uncle, ‘ If you play in your bedroom you’ll never learn, you’ve got to play as a band’ and we never fucking played in our bedrooms, we always practised together and played gigs. That way you’re playing to a crowd and you can gage their response. If you’re the best guitarist in the world there’s no point in playin to yourself coz no one’s ever going to hear you.

I want to talk a little bit about your current material and especially the song and video for Traffic. Explain the video to me, and why is there a transvestite in it?
Kelly – We weren’t trying to make the video confusing, the lyric’ these are models legs, but are they women’s are they men’s’ occurs as the transvestite is on the phone and I wanted people to register the line rather than let it pass by. I mean how many times have we been abroad and seen a woman across the street, thinking fuck that’s smart and then someone goes that’s a bloke! Then you say, oh yeah I knew that.

Have you ever pulled a transvestite?
Stuart – Actually, when we were in Paris, one of our techs saw this girl across the road and he goes, ‘I’ve just seen this bird and she’s got a cracking pair of tits’ so he goes across to talk to her and this bird turns around with the fucking deepest voice he ever heard, ‘Ca Va’ and he ran back as fast as he could.’ Kelly – Basically that’s what the song’s about. When I wrote it, it was a list of one extreme to the other because you’re never really sure what’s going on all the time.

Traffic has kind of launched you into a new era of popular music, what can we expect from you next?
Kelly – The next record, Local Boy in the Photograph is lyrically in the same vein and so is the material for our next album.

What’s the inspiration behind Local Boy in the Photograph?
Kelly – It’s basically a true story, it’s about a kid I new who jumped in front of a train. It’s not something that happens every day. I was about 14, and nobody knows why or what he did but one day he came into the market where I was working, asked what time the trains were running and went away. Next day I see his picture on the front page of the local paper.

Who writes the songs?
Kelly – I do the lyrics and then it’s a team effort putting the music to the words.

I’ve got a feeling that 1998 is going to be your year, is V2 giving you much support?
Kelly – They have spent a lot of money this year and they’ve supported us, but they’ve also hit a lot of brick walls. Radio One have not supported us whatsoever, the Chart Show wouldn’t play our videos. In fact TV and Radio have been a bit of a fucking downfall really, the press we’ve had is the press we’ve earnt. We only get written about when we’ve done something, yet you get bands on front covers for doing nothing. We get our first front cover tomorrow only because the album got to number 6.

Well that means that Kool will be your second front cover!
Kelly – That’s brilliant, we didn’t have anything written about us for 6 months, we were trying to build up a loyal fan base. When we did make it everybody wants to know, but the national press is pissed off because they weren’t there when it started. They weren’t with us and they didn’t believe in us at the beginning and now they want to do an article every fucking week.

Stuart – We’ve been prostitutes of the music industry; we’ve done every fucking thing anybody asked us to do. Even John Peel’s Birthday party, ‘we need another band to fill the gap, let’s get the Stereophonics’, oh yeah, we’ll do it, and then on the tickets it said that the show starts at 8 o’clock and we were on stage at 7:30!

You’re joking!
Stuart – That’s an honest fucking true story, we cancelled a gig which was sold out to do John Peel’s party ’cause we thought we’d get a lot of press and to get in with the people from Radio One and they didn’t even put us on the fucking playlist when the record came out the following week. In fact I think it was the gig in Norwich.

Kelly – Yeah it was, it was sold out and we had to fucking cancel it! And there were more people in our fucking crew than in the audience ’cause they put 8 o’clock start. We just sat on our bus after the gig talking to our management saying, we just cancelled a gig that was sold out to real fans, real people who bought the fucking album in order to play to these fucking twats down in London and they even get the tickets wrong! Richard – We didn’t want to do it, we new it was gonna be shit but it’s one of those, you scratch my back situations.

Radiohead had a similar problem with Radio One didn’t they?
Kelly – They didn’t get any airplay for their first two singles and now they’re the band of the fucking moment, and it’s the least fucking commercial album ever. So what the fuck do you have to do?

Have any of you got criminal records?
ALL – Yeah ABH and GBH, but they’ve been wiped clean now.

What other crimes have you committed?
Kelly – We pinched the Pentacostal van when we were kids. It was a transit van and you could open and start it with a lollypop stick! We used to drive it down the road and reverse it and park it back in exactly the same position about three times a week.

You’ve got to write a song about that.
All singing – Yeah, ‘It started with a stick…’

For any unsigned bands reading this, what’s your message to them?
Kelly – Keep writing, like Walt Disney said, ‘You’ve got to do a thousand shit drawings before you get a good one’. The only reason anyone stays in this business is through songwriting. It’s not through image or gimmicks, they help. Richard – Try to get a good demo together because they do throw the shit ones in the bin no matter what they say. They don’t listen to every tape they get. Kelly – I’ll give you an example of how crap the industry can be, I signed a deal to Polygram Music and two weeks later I received a rejection letter from Polygram Music after I’d already signed a deal for £200,000. That’s A&R for you.