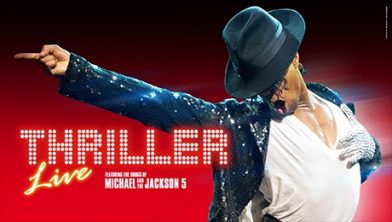 Direct from London’s West End, Thriller Live arrived at Milton Keynes Theatre as a stop for their 2019 UK tour in June. This spectacular live show has been seen in over 30 countries, and it’s a musical celebration of the work of the undisputed King of Pop, Michael Jackson.

There’s no story or plot as such, just simply a string of musical numbers, with a few brief words about Jackson’s impressive musical history in between songs.

Being a Michael Jackson fan myself, I didn’t know what to expect, but I was pleasantly surprised at the glittering costumes, electrifying choreography, and vocal performances. This wasn’t just one impersonator copying the work of Michael Jackson on their own, it was more of a homage by performers of all ages and genders putting their own spin on Jackson’s songs and dance moves. The array of super talented people included; Kieran Alleyne, Letitia Hector and Trace Kennedy.

Songs included all the hits like Billie Jean, Bad, and Thriller of course, but there were also other songs that only die-hard fans would know, such as ‘Heartbreak Hotel’ and ‘Dangerous’ which were great to hear among all the more well-known tracks. We also got to journey through time from the Motown years, to the Disco era, right up until the later years spanning Jackson’s remarkable 45 year career.

Personal highlights for me was the Moonwalk in Billie Jean, and I loved watching their incredible version of Smooth Criminal. Another great surprise was the level of audience participation. The performers managed to get the crowd up for dance battles and light-hearted banter and chanting in the crowd. There was a real sense of people coming together in the audience. They were all there for one reason, because they were fans, making the atmosphere brilliant, and the love was amazing to see, despite the recent allegations and negative news surrounding Michael Jackson recently.

The UK tour dates have come to a close for now, but you can still catch it in London’s West End. So, if you’re looking for something fun to do in London, I definitely recommend seeing this highly entertaining hit show.