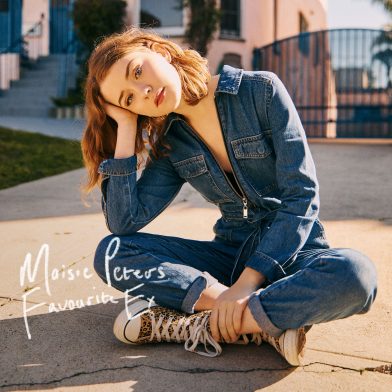 In the midst of a sold-out debut headline UK tour, rising young star Maisie Peters adds to her already impressive catalogue with the release of brand new song ‘Favourite Ex’. Released via Atlantic Records, ‘Favourite Ex’ is available to download and stream now

Showcasing Maisie’s gorgeous voice alongside minimalist strings, ‘Favourite Ex’ is a beautiful, stripped-back ballad about the conflicting feelings left in the aftermath of a breakup, and yet another demonstration of Maisie’s knack for emotive and relatable storytelling.

“I love songs that feel emotionally expansive, and to me ‘Favourite Ex’ holds so many different feelings – love, sadness, regret, gratitude, longing and perspective” explains Maisie. “The phrase ‘Favourite Ex’ was something my sister’s ex-boyfriend said to her on a night out that stuck with me, I just thought it was such an interesting contradiction and so I have him to thank for the title.”

Having now amassed over 100m global streams, Maisie’s star continues to ascend. The official video for her debut single, ‘Stay Young’, garnered over a million views less than five weeks after its February premiere, she currently boasts 3.4m monthly listeners on Spotify and has already received support from BBC Radio 1 and global superstar Sam Smith.