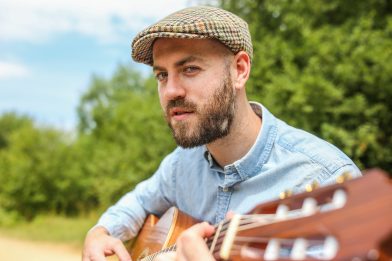 Singer-songwriter, musician, poet and Waltham Forest’s newest social commentator, Eddie Brett, recently debuted the first taste of his new musical project as mate, with the release of the single ‘myself’. He has now today shared a stripped-back, acoustic rendition of the track which you can listen to below.

‘myself’ looks into the struggles of alcoholism and coming to terms with the need for change. The original track was produced by Swindon’s very own acid house DJ Chaney and the accompanying video tells the story of a man waking up to the reality of his reoccurring alcohol addiction, with The Office’s Big Keith playing the starring role alongside mate.

Formerly of the British indie-pop band and Britain’s Got Talent Finalists Loveable Rogues, Brett has stepped away from the label-run, celebrity boyband model to produce art that is true to himself.

Using his crafty lyrical skills and London swagger, mate delivers a distinct mix of spoken word over beats that observes the sociopolitical climate of our times.

Having been in the eye of the media and tasting success in his previous endeavours, Eddie came to realize this was not the path he wanted to go down. It was missing the raw, real and personal touch that he loves about his art and as a talented songwriter and poet, Eddie took solace living on a small canal boat on the Thames where he started cooking up a wave of new ideas inspired by his reflections and observations of life.

The pseudonym mate derives from his Grandad’s champion pigeon and was chosen by Eddie in a desperate attempt for him to stop getting told off by his Nan for certain lyrics being associated with his real name.

With things to say and stories to tell, mate is one of the most exciting wordsmiths emerging on London’s scene.

Myself (Acoustic), an album by mate on Spotify