VIDEO: M.O return with brand new single ‘Who Do You Think Of?’ 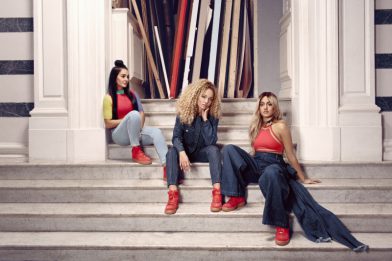 M.O make their major label debut with brand new single ‘Who Do You Think Of?’, launched today. Following the release of their critically acclaimed single ‘Preach’ last year, Annie, Frankee and Nadine have since signed to Polydor Records – home to the likes of Years & Years, The 1975, Ellie Goulding and HAIM.
Hailing from Sheffield, Manchester and Aylesbury, the trio have collaborated with Fred Gibson (Ellie Goulding) to create the Jamaican infused ‘Who Do You Think Of?.’ Additionally, the girls have been in the studio with heavy weight producers such as Dallas Austin (Michael Jackson, TLC, Gwen Stefani), heavytrackerz (Section Boys, Stormzy), Bless Beats (Jess Glynne, Tinie Tempah), Prince Charlez (Rihanna’s ANTI) and more as well worked on a collaboration with WSTRN. Additionally, the girls enlisted the help of Zac Samuel, Danny Dove, Royal-T and Eretyd Solo last month to launch the single’s remixes in the form of an EP.

The accompanying video, also unveiled today, was directed by Charlotte Rutherford who has previously worked with influential females of pop such as Charli XCX, Marina & The Diamonds and Tinashe.

Continuing their presence on the live circuit, the girls will also perform at this year’s Great Escape in Brighton on Saturday 21st May at The Dome supporting one of Grime’s most leading MCs, Stormzy.