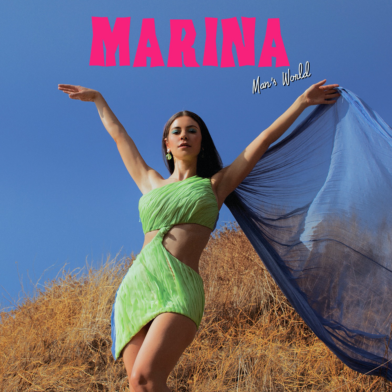 Neon Gold/Atlantic recording artist, Marina, has unveiled her new single, ‘Man’s World’, available now at all DSPs and streaming services. An official companion video is streaming on YouTube. See it below!

‘Man’s World’ sees Marina delivering on her promise to produce new music created alongside female collaborators, an endeavour which began last year upon learning that women account for only two per cent of producers and three per cent of engineers involved in popular music.

Written solely by Marina, ‘Man’s World’ was produced by Grammy Award-nominee Jenn Decilveo (Bat For Lashes, Hinds, Demi Lovato) and engineered by the first-ever female Grammy Award-winner for “Best Engineered Album, Non-Classical”, Emily Lazar (Sia, Clairo, Haim). In addition, the track’s companion video and photography was helmed by an all-female creative team, led by acclaimed filmmaker/photographers Alexandra Gavillet and Coughs. Furthermore, ‘Man’s World’ will be joined in the coming weeks by a series of remixes from visionary female artists such as MUNA, Empress Of, and more.

MARINA is an award-winning, platinum-selling singer-songwriter who burst on to the scene in 2009. She has since released four UK Top 10 albums including the Gold-certified ‘The Family Jewels’ (2010), ‘Electra Heart’ (2012), which debuted at No. 1 on the UK’s Official Charts, ‘FROOT’ (2015), and ‘LOVE + FEAR’ (2019). Each of Marina’s records have been accompanied by global sell-out headline tours, with shows at some of the most prestigious venues in the UK (Roundhouse, London Palladium) and US (Greek Theatre, Terminal 5). She has also performed at world-renowned festivals including Glastonbury, Coachella and The Governors Ball. Marina has amassed 2 billion worldwide streams and over 600 million video views. A socially engaged figure, she has given an address at the Oxford Union and has an incredibly passionate global fan base with an online following in excess of 7 million.