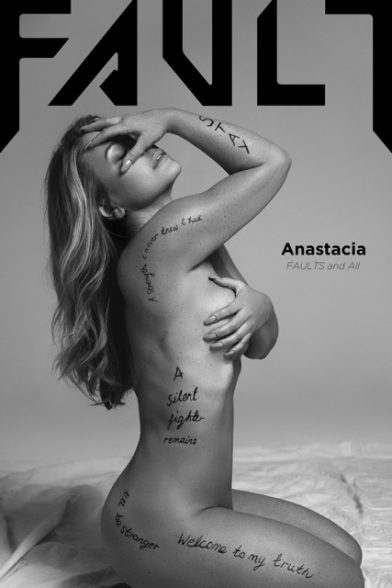 Anastacia has bared all in a stunning cover shoot for Fault Magazine online, revealing the scars left behind as a result of many cancer treatments and surgeries. The 48-year-old pop superstar has fought breast cancer twice and has said that she wants to give back as much as she can to help fund research into the disease.

Anastacia recently took part in this year’s BBC show ’Strictly Come Dancing’ and whilst on the show, announced a partnership with Cancer Research UK alongside making a personal donation to the charity during her time on the show to help fund more life-saving research into breast cancer research.
In the accompanying interview with Fault Magazine, Anastacia discusses her scars, learning to love her body again, reclaiming the femininity that cancer took from her, her duty to women now and her Strictly Come Dancing injury.
On why she feels it important to show her scars, Anastacia said: “I’m nervous to let people see them, I really am, but I want to be able to go on the beach and not have the first photographs taken of my body to be ones that I didn’t give. I want to be free and knowing that this photo-shoot will be out there and available, I can be on the beach and not worry about what people think. Paparazzi can take a photo of me breathing in and call it a gut or say all the things they want, that doesn’t scare me but my scars are a part of me and I want to be the one to reveal them. If paparazzi photographed them, I’d feel like I was being shamed but being able to release them this way, I feel extremely empowered.”

She continued: “I resented them – I resented how large they were but I also understood why I needed to go through all the physical changes. My scars are part of my journey and a reminder of all the things I went through with my mastectomy. At this point, I feel great to show them in a way that’s artistic with a respected team in fashion because it’s transformed my bodies “FAULTs” into art.’”

On her scars being in an ‘unusual place’ for mastectomy scars she reveals: “The surgeons had to go around my tattoo; the scars really should have been on my bra line but to graft skin the surgeons needed to find a place that wasn’t compromised. I wasn’t expecting it to be as long but it was the only way.”

On reclaiming parts of her femininity that cancer stole: “Every little thing that I’m doing, including Strictly Come Dancing was me trying to reclaim a little piece of my femininity that cancer stole from me. When you have as many surgeries as I’ve had, you lose so many female sensations that you’ll never get back. Nipple sensation is something that cancer robbed from my anatomy and I’m used to it now but there is that little part of me that will always be lost. Doing strictly and doing this shoot I feel like I’m finally becoming the woman that I was again.”

On discovering she had cancer in 2003: “2003, I actually went in to explore breast reduction as a preventative measure and two days before my procedure my doctor asked me to have a mammogram. I remember saying “I’m young what are you talking about!?” and he replied “I just want to check that your tissue is pristine” and me being me I said “Pristine, mean, clean that’s who I am when I’m on the scene!” [laughs] It was all jokes, I got my mammogram and lo and behold, they found cancer. I wasn’t so pristine, mean or clean after all… ”

On the importance of having mammograms: “If you’re a young woman in your mid twenties, then just get it done and you can have peace of mind until you’re thirty years old. In your thirties go every two or three years depending on your doctor’s advice and then after thirty-five, it’s safest to go each year. Find it early and you’re done and it’s so much easier.”

‘Cancer and death needn’t go hand in hand, if you catch it early you can live with it and seek treatment – it’s not spotting it early enough that’s scary.’

On her Strictly injury:
“I just thought it was a sore muscle and I just waited for it to pass but it got progressively worse and then I felt a lump which I knew couldn’t be cancer because I didn’t have any breast tissue left but it had to be something. I went to see a doctor and as it turns out it was an inflamed scar tissue. I found this out on Saturday morning and the show was filmed live on Saturday night.”

“I decided to continue with the performance, and we took out the lift to help me do that. By the end of the performance I was in a lot of pain, and knew I needed to see a specialist. Then I was told there was a dance off. I knew I was physically unable to perform, and I was terrified about what damage I had already done.”

“I began to cry and said “sorry I’ll get my things and go and thanks for the opportunity” and I was ready to leave …I didn’t know  they had contingencies for occurrences like that.”
FAULT Magazine full feature
Photographer: Andres de Lara
Fashion Editor: Rachel Holland
Anastacia will be returning to the UK with her Ultimate Collection Tour in May and June 2017.
Tickets are available now.