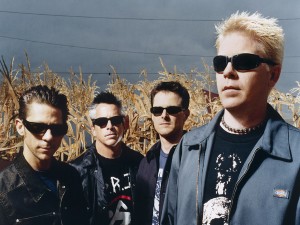 When The Offspring’s ‘Pretty Fly (For A White Guy)’ zoomed straight into the UK Charts at Number one back on January 24, 1998, the music-buying public were immediately divided into two camps.

Those who were already fully aware of the band, and who had followed their career for many years, watching with interest as they first skyrocketed into the major leagues with their third album ‘Smash’ in 1994, (10 years after their initial inception), and those who thought they were listening to a brand new act. Both camps took to the song like a duck to water, and its success continued to spread globally, reaching the top of the charts in practically every country that has such things, and also becoming the most downloaded song on the internet (a staggering record of 22 million times in a 10 week period). The album from which it was taken, ‘Americana’ has also sold over 10 million copies to date.

Not bad for four punk kids whose reason for originally recruiting their guitarist Noodles (a former school janitor) was his ability to legally procure alcohol at the time.
And now the band – Dexter Holland (vocals, guitar), Greg K (bass), Ron Welty (drums) and of course the aforementioned Noodles, are back with their new album, ‘Conspiracy Of One’ which sees them further hone their innate ability to write instantly-memorable and highly addictive songs.

The album kicks in, suitably, with ‘Come Out Swinging’…

“It’s one of my favourite songs on the record,” says Noodles, “a fast, hard-driving, punk rock, melodic tune, and it’s got a great meaning behind it – that when things start getting rough, and you start to get frustrated with the way of the world, don’t just let it run over you, but come out and fight against it, and I love that kind of song. I love the feeling of the music, and when it’s got a good lyric behind it like that, it makes it all the more worthwhile to me.”

The next track (which will also be the first single), ‘Original Prankster’.

“This is one of the more light-hearted, more ‘pop’ songs on the record – I think there’s definitely some punk rock attitude in there as well – it’s really just a fun song, not serious at all – we try to do some tongue-in-cheek, just ridiculous, goofy stuff, and I would have to say this song is more along those lines! We used the rapper Redman’s voice on this. With ‘Want You Bad’, the song structure is almost like an old pop rock song, it definitely has that feeling to it – I think it’s a great song, very familiar-sounding. ‘Million Miles Away’ is another one of my favourites – one of the more mellow ones on the record, and ‘Dammit, I Changed Again’ is probably my [overall] favourite – it’s fast, it’s got some great guitar hooks in it, great vocal lines and back-ups. It’s about being confused about right and wrong, just kind of struggling with that, and with your own identity.”‘Living In Chaos’ is I think probably our biggest departure for this record,
I can’t really think of an Offspring song that sets a precedent for it, except that it’s got that middle eastern kinda feel to it. We wanted to come up with a song that just had the crowd jumping up and down in unison in front of us,” he laughs, “and this is our attempt to come up with something that will get them to do that – most of our stuff is really too fast to get ’em to jump up and down together! Lyrically it’s about living in a society that seems to be running amok, or the feeling that it is when things start to get to you. ‘Special Delivery’ is just about a sick guy who’s a stalker – one of the first songs Dexter ever wrote had a real similar sentiment, and was about a friend of ours, who is pretty harmless but we made him really sinister in that song! But there are people out there who are like this and that’s kind of scary. The song is slow, kinda chaotic and schizophrenic…

“Whereas, if you talk about a ‘sing along in the pub’ song – that’s ‘One Fine Day’! I think that sounds more like a 1977 British punk song than anything we’ve ever done before. We’d just had the NBA finals or whatever, and the Lakers won and there was a big riot in LA – and I know that Europeans are no strangers to riots breaking out in their soccer games, and it’s even worse in some of the Latin countries – this is about having a riot with your friends and it’s kinda poking fun at the phenomenon as well as rejoicing in it, I guess…

“After offering to “just ramble and free-associate”, as he talked through the new songs, Noodles has built up a good head of steam, but suddenly comes to a shuddering halt on the next track, ‘All Along’ (“I think that was the first song written for this record, and one of the first ones finished. I don’t know, what is that song about? I’ve totally forgotten, I’m sorry!” he laughs helplessly.)He is firmly back on track for ‘Denial, Revisited’, however.

“That’s probably the slowest song I think we’ve ever done, I think we wanted to take something like ‘Gone Away’ from ‘Ixnay On The Hombre’ and take it a step further – it’s about a guy who refuses to accept that it’s over, keeps thinking he can fix it, and then all of a sudden is forced to realise ‘Oh damn, you know what? I’ve messed up for so long it really is over.’

‘Vultures’ is another of my favourite songs on this record, and strangely it’s a lot slower than the kind of song I normally like. Parts of this were written back when we wrote ‘Ignition’ [the band’s second album, released in 1992]. For me, this song is about somebody who thinks he’s losing his mind in a relationship – if things aren’t going well, he thinks he’s going crazy. I know I’ve been in relationships where I’ve been thinking: ‘Is it me? Am I just totally crazy? What’s going on – somebody please tell me I’m okay!’

“‘Conspiracy Of One’ itself is about this kind of lone rebel madman guy. Now that there are really no superpowers that are threatening the planet with annihilation, this is about a lone guy who does it – just gets a bomb in the back of his car and brings the whole world to its knees, just starts the spark that sets the whole thing aflame.”

The Offspring have always had a very strong ethos about giving as much back to their fans as possible. In the US, people who download the single ‘Original Prankster’ from the band’s own website are automatically eligible to enter a draw to win $1 million, which is coming direct from the band’s own pockets. They had hoped to make eligibility for the draw worldwide, but were unfortunately frustrated by the laws governing such things in different territories. There are some definite extra bonuses in store for everybody who buys a copy of ‘Conspiracy Of One’ however, as Noodles explains.

“We filled up all the extra space on the CD with the CD Extra. There’s some videos and some interactive stuff at the end that you can tap into via your computer, you don’t have to be on the internet. But for fans who are, who have the CD and who log into a special part of our website, we’re going to periodically release downloads, video clips, photos and other stuff. That’s one way we were trying to just experiment with the internet, to see if there’s ways to keep kids interested in buying CDs, and also to just keep them interested in the net, and in the website. You know, we want kids to have free access to all our music, and we trust that the ones that enjoy it will still buy the CD – I mean we really do, I think that the internet is a big promotional tool, rather than any kind of way to circumvent buying a record.”

A UK tour is currently being planned for early next year, probably in January. This would be exactly two years after ‘Pretty Fly…’ mania gripped the nation. The band were on tour at that time also – what was that like? “The single was just coming out, and our album in the States reached #2, so we were calling that ‘The #2 Tour’ – or ‘The Smells Like… #2 Tour’ – I thought that was pretty funny! And then we did another tour later on that was mostly festivals, and we played a [fan club] show at The Garage in London. That was so fun, really cool – we like to do stuff like that. Smaller clubs are just really cool, very fun… And then I went to the London Dungeon, and I caught the Plague from the Plague exhibit! And I got really sick, flew to South America and was sick the whole time I was there. Oh okay, I don’t know if it was actually the Plague, but it was something equally severe, it was just horrible…. But we had a great year of touring, all last year – the shows were as good as they’ve ever been, and the festivals – we played Leeds and Reading, and that was just awesome, just super fun, we played with such great bands. I wish we could have festivals like that in the US but it just doesn’t happen, it’s just impossible. Most of the festival-type shows there are sponsored by radio stations – just their big way of promoting the station by getting a bunch of bands to play short sets. So you get thirteen mediocre sets by pretty well-known bands, as opposed to a few really great sets by great bands at the European festivals.”

The promo video for ‘Pretty Fly…’ was hilarious, featuring the lankily inept Guy Cohen as the eponymous ‘hero’ alongside the band. What’s in store for ‘Original Prankster’?

“It’s really kind of a similar feel – the song is light-hearted rather than serious, so we did the same kind of thing. There’s a character in it who’s the original prankster, and he’s kind of wreaking havoc, presumably in the LA area. Concurrent with that there’s this hip hop beach party – of course! Which [laughing] makes perfect sense for a punk band from Orange County, to be playing the hip hop beach party at Venice Beach. But because it’s a ridiculous song, it has a ridiculous video to go along with it. No, we haven’t got Guy Cohen back for it – he’s outgrown us, he’s way too big for us now. Actually, I think he ended up having to get a job at a computer store – he probably wears a little tag with ‘My name is Fly Guy’ – he’s a shameless self-promoter that one!”

And finally, are you enjoying all this, Noodles?

“Yeah, overall I’m incredibly stoked to be in the position that I’m in. I get to play music that I love with guys that I love, all around the world. Making records is great, it’s an obsessive – sometimes frustrating – process, but it’s just wonderful: I just consider myself so lucky to be able to do it for a living. I certainly wouldn’t change my problems today for the problems I had seven years ago – it doesn’t even take me a moment’s thought. I wouldn’t change it for the world…”