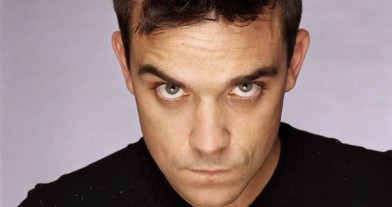 At the age of 16 he was a star with Take That, then there was rehab, now he’s an adored pop solo star but is he happy? ROBBIE WILLIAMS talks, in this rare and frank interview about downfall and resurrection.

In the recent ‘Music of the Millennium’ poll, Robbie Williams was declared, by half a million voters, the sixth most influential musician of the century. He was placed higher than Mozart.

Whether you agree with the outcome and perhaps did yourself place a vote for Williams or whether you ridicule the whole thing (Steps did appear in two categories remember!) you can’t ignore the fact that for a relatively ordinary young man from Stoke-On-Trent who wrote his first song in 1997 it’s a mean feat.

And so the ‘angelic’ one should be riding high on the sturdy wave of success smirking in his familiar manner and taunting ‘I told you so’. But hang on! What are these disturbing headlines? ‘ROBBIE TO QUIT MUSIC’, ‘ROBBIE UNHAPPY WITH SHOWBIZ’. Apparently Robbie has become disillusioned with the music lifestyle reportedly ‘not enjoying’ his career boosting triumphant Slane Castle show and becoming increasingly adverse to attention –

“Since people know my address I’m living like I’m in a goldfish bowl. The doorbell is ringing all the time and when I put my head out of the window for a few seconds, there’s an instant mass of people outside.”

And so it is that Robbie proves his ‘child boredom’ tendency – quickly becoming uninterested with his new ‘toy’ – the Take That incident only emphasising this. His new plaything is apparently acting.

But when Robbie becomes uninterested, he becomes seriously uninterested – becoming involved with something as far removed as possible from the original source of interest. From the clean cut outwardly happy singing and dancing combo to drink, drugs and ultimately rehab.

Are we witnessing a personality flaw in the ever loved Robbie – a touch of arrogance in the ‘fame’s too good for me’ attitude or is the poor bloke just suffering from an insecure childhood resulting in a vulnerable man not used to such attention?

“My first memory is that two boys on a beach laughed at me, cause my belly was bigger than theirs. That’s really sick, when the only things you remember are self-doubt and insecurities.”

Pulled into the Take That camp at the tender age of 16, Robbie hoped it would help his insecurity“because it feels good to be noticed. If you’re a child inside the applause gives you an ego-boost. It’s like a mirror you look into and find yourself beautiful. If you read ‘Vanity Fair’ you think famous people lead a fantastic life. I also thought that fame would make my weaknesses disappear.

Now I know that fame increases your weaknesses. Take That had the creativity of idiots and was lead by a Satan. If there’s someone who taught me the fear of God, it’s our manager Nigel Martin-Smith. Sometimes I’m still trembling of fear when I think about that devil. That bastard has messed me up emotionally. He knows that there are young people, who’d do everything to become famous. He’s only managing naïve teenagers and it was very easy to manipulate me when I was 16. Unfortunately I forgot to read the small print in the contract. And I didn’t understand that I made a false pact: He gives you fame and wealth and you sacrifice your soul and 25 per cent of the incomings.”

Becoming a millionaire at the age of 18 has obviously lightened the load – “I’ve just bought a pool table for $50,000 from New York” – but no amount of money could shift it completely as Take That gradually forced Robbie to lose any inkling of respect he once had for himself – “We once played in a school in America. The audience were black kids who were into rappers like Naughty by Nature. And there we were, singing “I found heaven on the wings of love”. That feeling of shame I will take into my grave with me. I hated our music and in the end I also hated myself.”

Robbie now found himself faced with an opportunity to get out – he had found his new ‘toy’ – “I was at the end and when I’m feeling bad I become self-destroying. So I took all kinds of drugs. It was quite funny for some time.” The attention and publicity stayed with him though as the tabloids branded him a ‘fat joke’ – “I was a miserable, pitiable creature. In the morning I first finished the bottle of red wine I had fallen asleep over two hours earlier. Then I took a line of coke, cause otherwise I wouldn’t have been able to get up. I told my tale of woe to everyone: “I’m a victim. The whole world has treated me badly.” If you’re weird and confused already drugs are the worst combination with that.”

This realisation of a diminishing life made Williams determined to resurrect his career. Two Number One platinum-selling albums, countless hit singles and sell-out concerts later and Robbie still exhibits those insecurities – “Take that microphone away from Robbie Williams and he is shy and insecure. I can perform in front of 80,000 people. But I turn into a trembling bag of nerves if I have to talk to someone in a bar, someone I don’t know for many years. I still don’t know who I am.”

Apart from the very public drugs incident these insecurities have remained relatively private from the prying public eye and it comes as a shock to see someone, known of as a loud, out-going, cheeky and fun-loving guy, suffering like this. Robbie however knows he would never have amounted to anything displaying this instability – “When you don’t show off a massive ego you will never become a pop star.”

It certainly is this ego that has made Williams successful ensuring his unique brand of music together with his quick wit and intelligence make him a ‘one of a kind’ performer. Robbie agrees – “There’s just one thing I think I really am: Very entertaining.”

If you were truly honest with yourself I don’t think anyone out there can disagree. Compare him to other artists of the time and you’ll realise why – Robbie chooses Gary Barlow as a comparison! – “One of my songs is called ‘Strong’. His new record is called ‘Stronger’. So I will have to call my next album ‘Strongest’. But I shouldn’t be saying anything against Gary. His interviews are so embarrassing, they make me look like a God, and his music makes minesound better than Johann Sebastian Bach.”

No Robbie – better than Mozart remember!