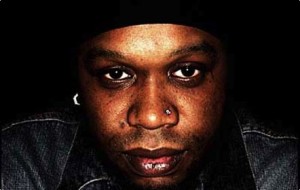 Ask anyone in drum’n’bass what first inspired them to make music and Grooverider’s name is sure to crop up.

Not only has he notched up an incredible twelve years behind the decks, Djing everywhere from dingy illegal warehouse panties to huge outdoor festivals, but his legendary radio shows with long-time companion Fabio (first for Kiss FM and now Radio One FM) helped spread the gospel of drum’n’bass further and further afield.

As resident at seminal London night Rage throughout its four year stint at Heaven, he personally oversaw dance music’s evolution from acid house to techno and finally drum’n’bass. “Everyone who’s about on the scene now was there,” he recalls, “it was like school for a lot of people.

That club’s got something special about it – when you play in that DJ booth way above the dancefloor, you really feel like an overlord. You’re in the throne. You’ve got to perform. I used to go there years before and watch Paul Oakenfold playing and think ‘yeah, I wouldn’t mind being up there myself” It was also here that ‘Rider, a born and bred South Londoner, first encountered a budding young producer called Goldie.

“Somebody gave me one of first records on an acetate,” he remembers, “and I was playing out one night when suddenly I see some geezer banging on the door of the DJ booth. “I thought, who on earth is this fucking nutter?’ He was shouting ‘this is my fucking tune. Let me in!’ So I let him in and congratulated him and it all went from there.

We just kinda hit it off straight away.” These days he organises Goldie’s Metalheadz club nights usually topping bills that invariably read like a who’s who of drum’n’bass. “Everybody wants to play for us,” he announces proudly, “we do good parties then people want to play at them.

All a far cry from the days in the mid ’80s when Groove first ventured behind a pair of Technics at Brixton pirate radio station Phase One. Back then, way before acid house turned the music business on its head, he’d play anything from soul, funk and rap to raw early electro, R&B and even punk. “Yeah’ he laughs now. “I used to love all that skinhead music too, I loved the Jam and the Clash. X Ray Spex were my group! I couldn’t mix or nothing when I started at the station, but it didn’t matter, because its not about how well you mix, it’s about what music you play.

A lot of people have forgotten that over the years.” An all-encompassing atittude that’s served him well on his journey from unknown pirate spinner – he gave up as soon as he discovered the DTI could seize his record collection – to one of the biggest and most respected names in dance music today. One he kept close to his heart when he embarked on ‘Mysteries Of Funk’ for Sony offshoot Higher Ground. “I was frightened when I started out,” he admits, its a frightening thing to do. I’d never done a tune under my own name before. I’d always used aliases.

When I started my label Prototype I made all the tunes myself because I had a few bits of gear and I was just practising, testing things out, just fucking about basically. Although initially suspicious when approached by the major – “I though, do they want me to start making pop music or something ?” ‘Rider now applauds Higher Ground for giving him the time and freedom to experiment and push his music beyond the strict confines of the dancefloor. “They’ve been really patient with me. “he states, “Because it’s two years since I signed with Sony. But they’ve not put me under any pressure at all and now – finally – I’ve produced an album for them.”

Some 15 tracks long, ‘Mysteries Of Funk’ is an unashamedly ambitious project that only someone with Grooveriders experience and diverse musical background could possibly hope to pull off.

Hi, I hope I haven’t caught you at a bad time!

G. Yo, yeah, well actually I’m in the toilet

So anyway, we’ve been playing the new album in the office and thought it sounded a bit darker and more satanic than what we expected. Was this deliberate?

G. I got my influences to do this project from all styles of music. I’m not into anything in particular but I respect anything from techno to jazz.

It sounded very ‘raw’ and almost as if it was recorded on an 8-track. Is this the sound you were looking for?

G. Yeah, coz that’s what I’m all about. It’s all about the hardcore. I mean it was really hours and hours of programming that did it. It was hard, really hard man coz we had optical engineering, we worked really hard on it. Matt Quinn engineered it and it was tough.

How did you two hook up?

G. I’ve known Matt for a while, and we’ve played music together. I was at his house working on his tracks ‘n’ shit. At that point I was engineering myself, and he like, showed me different techniques and teaching me how to use the samplers and shit like that. So it all started from there and we started hanging out together and I asked him if he wanted to engineer my album for me,

For a drum ‘n’ bass album it sound pretty top-endish, you’ve used loads and loads of shakers, was this your intension, to make Drum ‘n’ Bass less dark ?

G. Well, in a way coz you can’t use the same formula for every track, I tried to produce a whole scope really. I tried to use the musical side of Drum ‘n’ Bass but convey it in the B sides. So I tried to gel everything together coz that’s what Drum ‘n’ Bass is about. It’s not just about hard or dark or jazzy, it’s a whole range of things.

Having said that, do you think that this album is going to appeal to a bigger market ?

Are you looking for chart success with this album ?

G. I just want people to hear it. I don’t care whether it gets chart success or not. If it is then that’s fantastic, but if it’s not then I’m not gonna be upset. I just wanna do what I’ve gotta do. Music for me isn’t about dope. When go out Djing I just wanna put out the stuff I love and this project is a way to show other skills that I have.

Have you got any other projects like films and collaborations ?

G. At the moment I’m not even thinking about that coz I’ve spent nearly a year and a half on this album. Having said that, I think I’m just gonna remix for a while an hopefully next year the projects will start rolling.

What are your top five tunes ever ?

G. 1/ Nearly Breaking Even – Nero Burgess 2/ Word and Earth – the album Spirit 3/ Fallout – The Morning After 4/ Sounds Like The Strings of Life – Derek May 5/ Groove – Kevin Saunderson Who would you most like to have a one to one with ? G. Probably Marvin Gaye coz he’s one of the smoothest singers that’s ever graced the Earth.

Have you got a message for any of the KOOL readers who are coming to the gig in Norwich to see you, what can we expect the Rider to serve up ?

G. The rider doesn’t know, you’ll know on the night! 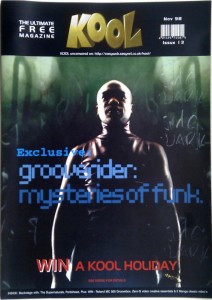