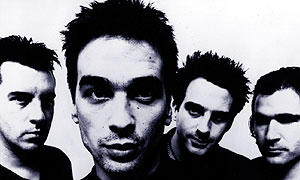 NME readers will remember the full page advert that he took out last year extolling their virtues and touting them as the most important band since the likes of the Sex Pistols (who, incidentally 3 Colours Red once supported. How Kool is that?). Was he right?

A year on, and with the Xmas excess over, I’m ready to get down to brass tacks with guitarist Chris McCormack. He’s a bit worried at first, as I know two girls that appeared in the legendary lost video for ‘This Is My Hollywood’ that was shot early in their careers.

My girly friends showed me stills, and reported back with a few tales about the shoot, and I can only say I wish I’d been there…shirt potatoes, a glitzy bed and a rollicking good time seemed to be occurring.

I tell Chris this, and he takes up the story: “Oh my God – well, you should’ve seen the fucking out-takes! MTV phoned me up, so I got the tape and then went to meet someone in the pub. We’d been doing interviews all day, and I was blotto.

Eight hours afterwards someone came down with the tapes. There was only one master, which I was supposed to give to MTV, and I fucking lost it in the pub! All that effort and time…I was steaming. I felt such a cunt.

I lost it in Camden and it never ever turned up – who the fuck would want it? You could probably have a couple of wanks over it, but after that? I was pissed off for a day, but after that everyone just laughed about it. It was just such a fuck-off, what can you say. It was such a good video.

The bed was amazing, and the drink and drugs were even better – and the girls. It was a good start to our career!” And, as I pointed out, their notoriety was from that point onwards assured…

As for getting signed to Creation, I asked Chris if he was surprised. “Well, I knew about them having Oasis, Teenage Fanclub, and Sugar – three bands I liked – and I thought maybe we’re not quite as mad as them.

We are the ‘heaviest’ band on the label by quite a bit, but I thought it was interesting, and I was up for it”.
“The thing is too, Creation talk a lot more sense than anyone else. They’re less corporate, and give you less bullshit. They said ‘we’ll sign you, and this is the way we see you going, and this is how we see your music’ and we kind of agreed with it – it was the most sense we’d had talked to us ever, really.

We wouldn’t have signed to Creation either if Alan McGee wasn’t such a huge fan. We got offered loads of other deals, and we met them and it was like ‘yeah well, you might not sell a lot of records, but we’ll pay you this…’ and it was like, you were defeated before you’d even stuck a single out! We’re thinking, like we want to be bigger than Led Zeppelin – we don’t want to be some little indy-scmindy fucking Top 100 band! We had a lot bigger expectations for ourselves than a lot of people had at the time. We’ve always been ambitious – you’ve got to be”.

I raised Alan’s full page ads in the music press with Chris, after all it was a bold, and slightly bizarre thing to do. “In a lot of ways it created a bit of a backlash. It wasn’t like we said all these things – it was just what Alan thought of us.

It was possibly a bit early considering we hadn’t had a hit at that point, but looking back it did a bit of good in some ways, and a lot of bad in others – a lot of people had their knives out for us before we’d released a single. Fortunately for us Alan loves us enough to get his arse in gear and work for us – and he totally does that. 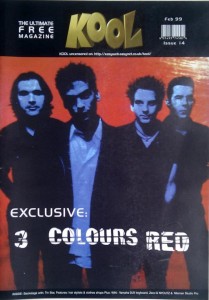