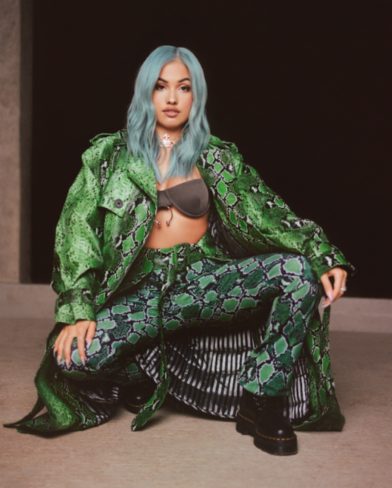 ‘Boyfriend’ is the incredible new single from Mabel, which is available now on Polydor Records. This comes hot on the heels of Mabel winning Best British Female at this year’s BRIT Awards, where she also performed a show-stopping rendition of global smash ‘Don’t Call Me Up’ (and was joined on the red carpet by her mum, Neneh Cherry, thirty years to the date of her own BRIT win). Mabel’s acclaimed ‘High Expectations’ headline tour continues this month (“a blast of charisma from the warrior queen” Guardian), with summer festival appearances also already confirmed at the likes of Lovebox, Parklife, Primavera Sound, Longitude and Reading & Leeds.

‘Boyfriend’ sees Mabel take another stride out on to pop’s world stage. An anthemic and unapologetic blast of 2020 girl-power, the track is a call-to-arms for not needing a man on anything other than your own terms. Co-written by Mabel and fellow-hitmakers Steve Mac and Camille Purcell (the trio worked together previously on ‘Don’t Call Me Up’ and ‘Mad Love’), ‘Boyfriend’ is Mabel’s first official solo single since debut album ‘High Expectations’, her smash collaboration with Tiesto (‘God Is A Dancer’) and this year’s beautiful, alternative Christmas ballad, ‘Loneliest Time Of The Year’.

Having just turned 24 – the day after her BRIT Award triumph, no less – Mabel now finds herself the leading light in UK pop. Since she quietly uploaded debut track ‘Know Me Better’ on to Soundcloud in 2015, Mabel’s tireless worth ethic and candid storytelling has taken her to increasingly giddy-heights (and newfound levels of confidence). Don’t Call Me Up’ was the biggest selling single of the year by a UK female artist in 2019 (with ‘Mad Love’ also in the annual top 10), having surpassed 1 million UK sales and 1 billion global streams and led to Mabel’s debut album, ‘High Expectations’, charting at number 3 and landing in the UK’s top 10 best-selling debuts. Whether tackling female empowerment (‘Boyfriend’), a toxic breakup (‘Don’t Call Me Up’) or experiences of depression (see ‘OK (Anxiety Anthem)’, and her moving discussion on Elizabeth Day’s hit podcast ‘How To Fail’,
Mabel appears the type of songwriter whose willingness to be so honest and vulnerable has only brought her greater power – not to mention a global audience of millions, for whom she is now a vital young role model.

Before you even get to her new single, Mabel can make the rare claim to have a gold-selling album/mixtape, four platinum-selling singles, a silver-selling album, two gold singles and two further silver singles already under her belt. The perfect, knowingly-imperfect modern pop star, Mabel clearly knows herself better than any ‘Boyfriend’ could – watch her seize her moment, and make many more for others to follow.