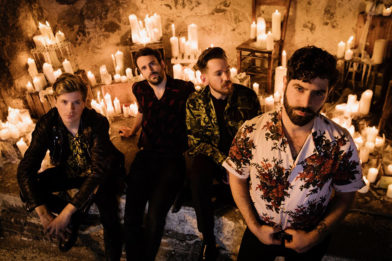 Following the unveiling of yet another stellar lineup, BRITs Week Together with O2 for War Child today announce FOALS will be headlining a one-off show at O2 Shepherd’s Bush Empire on Monday February 17th as part of this year’s incredible series.

From playing chaotic house parties in their home city of Oxford to becoming major festival headliners across Europe, FOALS’ trajectory has been remarkable. Recently nominated for Best Group at The BRIT Awards 2020, the band received widespread critical acclaim with fan devotion in equal measure, picking up NME and Q Award wins, plus BRIT Award, Mercury Prize and Ivor Novello nominations, alongside amassing 1.7 million sales of their four Gold-certified albums and over half a billion Spotify streams since 2015. With a UK headline tour taking place throughout May, which will include three sold-out nights at London’s Olympia, their one-off set at O2 Shepherd’s Bush Empire is a rare opportunity to see FOALS in a truly intimate setting.

Speaking about the show, Yannis says: “It’s an honour to be playing a show in support of War Child and their vital work with children affected by war. One in six children around the world live in a conflict zone and we’re proud to be able to use our platform to bring attention to this cause. It’s going to be a special night.”

Tickets for FOALS will be available to buy exclusively to O2 customers via Priority Tickets from 9am Wednesday 22nd January, with general tickets available from Friday 24th Jan at 9am via www.britsweekwarchild.co.uk.