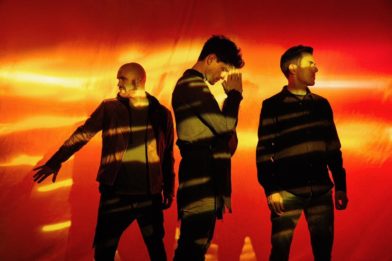 The Script are back at the top of their game with their new album ‘Sunsets & Full Moons’. The album shot straight to #1 in the UK and has over 49 million streams already, a triumph that means that five of the band’s six albums have now topped the charts. And in Ireland, they’ve achieved something bigger still, as ‘Sunsets & Full Moons’ ensured that all six of their albums have entered the charts at #1.

With the album already approaching Silver status in the UK, The Script build on its initial success by sharing their new single ‘Run Through Walls’. Already proving to be a firm fan favourite with 4 million streams to date, ‘Run Through Walls’ captures the strident melodies and heartfelt emotions that have come to be hallmarks of The Script’s arena-filling sound.

“This one’s a hyper-personal song,” explained frontman Danny O’Donoghue in Apple Music’s Editors’ Notes. “Earlier this year, I lost my mum. She passed away on the 8th of February. We buried her on Valentine’s Day, the same day we buried my father, 12 years to the day. I guess the comparisons are eerie, but when you’re going through a very rough time like that, there’s only one thing that’ll get you through that, and that’s your friends and family. I know now who my friends are, and I now know what the importance of life is; everything came into a very sharp focus. It’s an open love letter to those people who go above and beyond for people who are in need.”

2020 is also shaping up to be a phenomenal year for the Irish trio. In February they commence a major arena tour spanning the UK, Ireland, and Europe in which two nights in Dublin and one show in Belfast are already sold-out. They’ll hit the road again in the summer with a mixture of huge outdoor gigs and major festivals sets throughout Europe, including one of the biggest moments of their career when they headline the Irish Independent Park in Cork.

Any remaining tickets are available from https://www.gigsandtours.com/tour/the-script and https://

The Script Upcoming Tour Dates are as follows