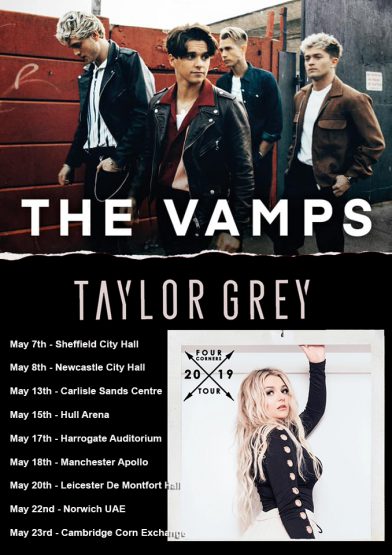 We are giving away a FREE pair of tickets to see Californian pop star Taylor Grey supporting The Vamps at The UEA in Norwich on May 22nd.

Her latest project, EP GREY, produced by Oliver “Oligee” Goldstein (Foster the People, Christina Aguilera, Flo Rida, Ellie Goulding) and executive producer, Josh Abraham, has been featured on some of Spotify’s major playlists such as Pop Sauce and supported by the likes of iHeart, YSBNow, Just Jared, and more.
Not just a pretty face – for the last 3 years Taylor Grey has been balancing her degree in Psychology/Neuroscience at Stanford University with her burgeoning music career.

Despite her gruelling academic schedule, Taylor is excited to finish her mid-terms and reunite with The Vamps on their 2019 ‘Four Corners’ UK Tour after sharing the stage with them in her hometown of San Francisco and Los Angeles during their USA 2018 Tour. The 21-year-old Northern California native has also previously shared the stage with the likes of Flo Rida, Fall Out Boy, Walk the Moon, Sabrina Carpenter, Jake Miller, O-Town and Ryan Cabrera, among others.

For more info and to listen to her music, please have a look at her website: taylorgreymusic.com

Taylor Grey will be joining The Vamps on tour on the following dates:

Please note that the venue has an age restriction of 14+ so please do not enter if you are below the required age.

The competition ends on Wednesday, May 15. The winner will be notified and entries received after the closing date will not be included. No cash value or alternative. Normal competition rules apply.