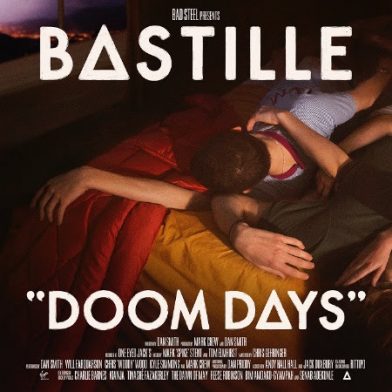 Doom Days, Bastille’s grippingly confident third album, is a record of hope for turbulent times. Made by Dan Smith with bandmates Kyle Simmons, Will Farquarson and Chris ‘Woody’ Wood, and producer Mark Crew, it sees the Grammy-nominated, Brit winning four-piece stretch out and open up like never before.

Doom Days marks something of a shift in perception from its widely acclaimed No.1 predecessor ‘Wild World’, which confronted the world and the actions of those in power. Recorded throughout 2018 at the band’s South London studio, “One Eyed Jacks”, the new album captures the need to temporarily switch off and escape whilst taking the listener on a big night out in search of distraction from the surrounding apocalypse; be that screaming along to the radio in the back of an Uber careering through the city (the electric Quarter Past Midnight), getting loved up in the company of good friends (future classic 4AM), a casual hook-up (Another Place) or the end-of-night longing to be with somebody (the captivating Those Nights). It revels in the bad decisions we make both personally in our relationships and collectively on a macro scale (Bad Decisions), tells a relatable tale of being cornered into a deep discussion about the world’s problems when all you want to do is have a good time (Million Pieces), and wryly confronts modern anxieties, taking side-swipes at phone addiction, porn addiction, fake news and climate change denial (the uncompromising Doom Days).

Doom Days finds Bastille at their most lyrically provocative, most accomplished, and most vital. It taps into globally felt worries whilst also working on a much more intimate level. Setting the album over the course of one night allows the band to hold a mirror up to the world using personal, relatable situations.

Bastille’s unique sound – that cinematic, ever-changing odd pop that masks the unusual subject matters and sometimes bleak realities reflected in their lyrics – has connected with audiences across the globe like no other British band in recent memory. Having sold over 8 million albums and with accumulated global streams reaching over 6.5 billion, the band continue to be one of Spotify’s top 40 most listened to artists in the world. Their previous albums both debuted at No.1 in the UK and charted top 10 in the US Recent single “Happier”, now certified platinum in the UK, spent a full 6 months in the top 10 of the US Hot 100 chart.

As you’d expect of a band that have always cared little about genre, their third album finds them still evolving and pushing things forward. Doom Days bustles with energy and ideas. Its diverse sound takes in gospel, house music and R&B to name a few, and incorporates instrumentation inspired by their much-acclaimed Re-Orchestrated tour. The album is at times introspective, intimate, political and also perhaps their most danceable yet, with tracks like Million Pieces and Nocturnal Creaturesbuilt on 90s breakbeats and UK garage hooks. Clever pop culture references, mood-setting dialogue clips and a rolling cast of backing vocalists add textures and voices to this night out and help elevate many of the album’s special moments.

Doom Days is a record that celebrates real human connections and urges us to keep searching for moments of elation. It’s an album that starts in the middle of an Uber ride through the city streets and ends waking on the kitchen floor with the healing sounds of euphoric new single Joy, which sees the demons of life’s hangovers dispelled by a simple phone call from someone special. “That glimmer of hope at the end of the album says everything,” says Dan. “The smallest human gesture can pull you back from the brink.”

To mark the release of “Doom Days” the band are excited to announce a run of 9 intimate dates throughout the UK supporting local venues in towns and cities away from the usual touring route. These unique shows will give fans the opportunity to experience an ‘apocalyptic party’ club night, warming them up with DJ sets before taking them on a journey through the narrative of the album, which the band will play live from start to finish. For tickets go to https://www.bastillebastille.com/live/

Dates are as follows