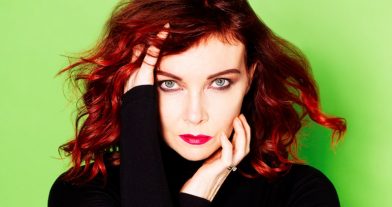 Having won six Ivors, numerous ASCAP awards, been nominated for 4 Grammy’s and 3 Brit Awards, it is little wonder Q Magazine hailed Cathy Dennis “one of the most influential people in the music industry.” She has, after all, penned global hits for Kylie (‘Can’t Get You Out Of My Head’), Britney (‘Toxic’), Katy Perry (‘I Kissed A Girl’) alongside songs for the likes of Celine Dion, Pink, Ariana Grande, Kelly Clarkson, Christina Aguilera, and Little Mix to name just a few.

This year Cathy is celebrating an incredible 30 years in the music business. Having landed four top 10s in the US and released three acclaimed solo albums along the way, Mighty Hoopla marks Cathy Dennis’ return to the public eye and a rare opportunity for one of the most influential people in British pop history to take their rightful place centre-stage.

Cathy Dennis is the latest peek of Mighty Hoopla’s extraordinary 2019 line-up, which is topped by multi-million-selling headliner Chaka Khan. Where else are you as likely to witness iconic acts like All Saints or Bananarama as you are RuPaul’s Drag Race All Stars’ winner Trinity The Tuck? Or, to find names such as Tove Lo, Kate Nash, or Confidence Man side-by-side with London’s most subversive club-nights? Since its inception in 2016, Mighty Hoopla has led the charge to become not only the most colourful party in the town, but a thrilling space in which all walks of life (not to mention pop royalty) stand side-by-side with London’s most thrilling alternative nightlife. And it’s this fine balance which is the essence of Mighty Hoopla, the singular festival in which truly anything is possible and truly everyone is welcome. A festival that celebrates pop and club culture in completely equal measure.

The A-Z of acts and club-nights confirmed for Mighty Hoopla 2019 are as follows:

Originally starting it’s life at Butlins in 2016, Mighty Hoopla then moved to Victoria Park a year later before finding its home in Brockwell Park in 2018. Now lead by the team at East Creative, an Warholian umbrella of LGBTQ+ artists and events including Sink The Pink and Savage Disco, have given Mighty Hoopla something they felt was missing in London.

Working with artists, creatives, designers and most importantly the community, East Creative ain to bring everyone together under the wider manifesto of inclusivity, equality, and change. “This is,” says Tagg, “a new ecosystem for LGBTQ+ events. We had to invent it because no one else had.”

And at a time when the watchwords for London nightlife over the last few years have been closure and prohibition, Mighty Hoopla appears to mark – almost entirely by accident – A Real Moment. “Everything we’ve been working towards,” says Fussell, “felt like it came to fruition at last year’s Mighty Hoopla. It was the happiest day of my life.” The mission now, then, is to push even further in against conservative convention. To make a space in which the margins take a rightful march towards the mainstream, cascading from the night-time into the sun-kissed day of a London festival. In a bleak world, the Peacocks will always win.

Subject to license Mighty Hoopla will take place in Brockwell Park on June 8th 2019. Early-bird tickets are on sale now at: www.mightyhoopla.com