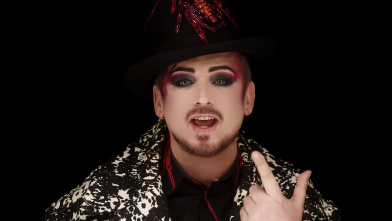 Boy George and Culture Club unveil the video for single ‘Life’ today. Shot by Rankin, the accompanying video of the most intensely personal song Boy George has written to date begins with his iconic makeup stylings but later sees him stripped of his signature make-up and hat.

His emotion, his tears, captured and ultimately countered, with a message of hope. Revealing his vulnerable side, Boy George has said the video is a tribute to his many fans who have stood by him throughout his career. Watch the video here.

The band will perform ‘Life’ on The Graham Norton Show this Friday. The song, produced by Future Cut, tells of battling and beating the darkest times, through the support of others and by holding on to this hope. Of the track, Boy George says:

“John Lennon said ‘LIFE’ is what happens while you are busy doing other things, but sometimes you have to stop and look with sadness and pride at what you have done and created in your own life and value the rich complexity of it!

As the lyricist of ‘Life’ I wanted to express something truthful, honest and bare while carrying an uplifting message of hope. It’s my story but it’s a story so many people will resonate with. A story of recovery, transformation and the start of a brand new journey which has already brought Culture Club well deserved accolades. It’s a song about second chances and new beginnings, enlightenment, spiritual growth and personal redemption.”

Since their inception in 1981 Culture Club have sold more than 150 million records worldwide, recognized as a Grammy Award winning UK institution with a stream of classic hits including; ‘Do You Really Want to Hurt Me’, ‘Karma Chameleon’, ‘Church Of The Poison Mind’, ‘Victims’, ‘It’s A Miracle’ and ‘The War Song’.

The group are fronted by singer/songwriter Boy George, universally loved as one of music’s most iconic artists, with Roy Hay on guitar/keyboard and Mikey Craig on bass. As the first multi-racial band with an openly gay front man, Culture Club set many records and established themselves as icons of British musical history and popular culture. During the summer they played to over 500,000 people in the US and have just finished performing ‘The Life Tour’ around arenas across the UK and Europe.