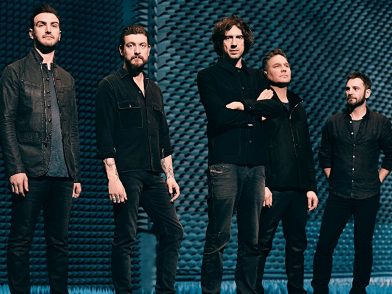 Northern Ireland rockers, Snow Patrol have announced they will play a one-off intimate show atLondon’s Porchester Hall on November 19th, hosted by Absolute Radio. Lucky fans that win tickets for the event will be in for a real treat, as the exclusive set will feature a stripped back performance from the band, with strings.

The event is an incredible chance to catch the band in close quarters, ahead of their headline UK arena tour that starts in December. To get tickets, fans should listen in to Absolute Radio and head towww.absoluteradio.co.uk.

Snow Patrol released their much-anticipated seventh studio album, Wildness earlier this year, entering the UK charts at No.2. Their latest singles including ‘Don’t Give In’ and ‘Empress’ have been mainstays on the Absolute Radio playlist, and the band are also known for their many fan-favourite hits, including ‘Chasing Cars’, ‘Run’, ‘Chocolate’ and ‘Open Your Eyes’.

In fact the band have so many great songs that James Corden is said to be campaigning to have them on Carpool Karaoke – with lead singer Gary Lightbody admitting to Absolute Radio’s Dave Berry earlier this year that he would love to take him up on the offer.

November’s special one-off gig will be hosted by Absolute Radio’s Sarah Champion and Pete Donaldson. They said “Snow Patrol are undeniably one of Britain’s best exports, charting internationally and selling-out venues across the world. To have the chance to see a stripped back performance with strings in such an intimate setting is incredibly special, and is sure to top off what has been an incredible 10th birthday year for Absolute Radio.”

For any fans that miss out on the very limited tickets, they’ll be able to listen back to highlights from the set on Absolute Radio on Thursday 29th November from 7pm. Snow Patrol will start their UK Arena tour in December in Newcastle. The band’s tour ends at Wembley Arena. Full details at www.snowpatrol.com