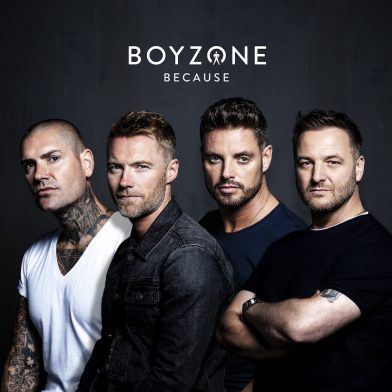 Boyzone continue to build anticipation towards theNovember 16th release of their final album ‘Thank You & Goodnight’ by sharing its lead single ‘Because’. The song was co-written by Ed Sheeran, Amy Wadge, John Shanks and Ronan Keating. Ed is a long-term friend of Ronan Keating and performed at his wedding in 2015.

Produced by John Shanks (Take That, Westlife),‘Because’ is an emotive and dramatic love song which finds Boyzone at their anthemic arena-filling best. The infectious sing-a-long chorus makes it the perfect feel-good song for the summer.

Directed by Mike Baldwin (The Vamps, Olly Murs), the song’s official video heightens its uplifting sing-a-long atmosphere. It mixes performance footage of Ronan,Keith, Mikey and Shane belting out the song at karaoke. That celebratory feel is further boosted by clips of Boyzone fans from around the world singing its towering hook.

Both ‘Because’ and ‘I Can Dream’, a moving tribute toStephen Gately, are provided as instant downloads for fans who pre-order ‘Thank You & Goodnight’ from

In addition to Ed Sheeran, the twelve-track album finds Boyzone collaborating with another special guest songwriter in the shape of Gary Barlow on ‘Love’. Producers on the album include Xenomania’s Toby Scott, young Swedish hitmakers Goldfingers and SteveSoloman (James Arthur, Jason Mraz).

Boyzone recently announced details of the ‘Thank You & Goodnight’ farewell tour that commences next January.