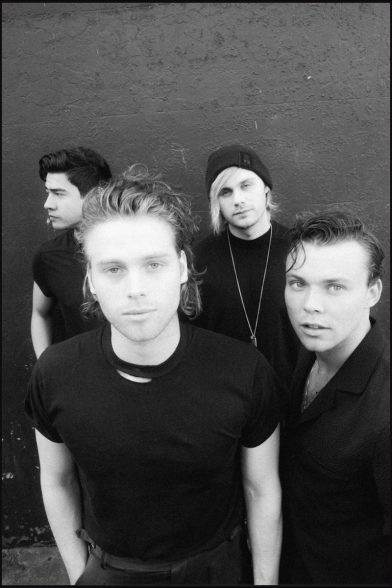 Today, Capitol Records released ‘Youngblood’, the new studio album from 5 Seconds of Summer (5SOS). Following the band’s self-titled 2014 debut and 2015’s ‘Sounds Good Feels Good’ – which each entered the Billboard 200 at No. 1 – ‘Youngblood’ expands 5SOS’ musical parameters while retaining the hooks and trademark DNA that’s always been a massive part of their appeal.

Rolling Stone says, “5 Seconds of Summer shred on ‘Youngblood.’ (The song) has a relentless, thumping rhythm, around which (5SOS) move between delicate verses and a booming chorus.” Nylon declares, “(‘Youngblood’) is… great. Like, really, really great” and Alternative Press calls the song, “stunning.”

Watch the ‘Youngblood’ live video, filmed across the band’s sold out 5SOS3 Tour, HERE. ‘Youngblood’ is the follow up to the album’s first single, ‘Want You Back,’ which debuted at No. 1 on iTunes in over 18 countries earlier this year.

Following the huge 5SOS3 tour that began in Europe in March, came to London in April, headed to their hometown of Sydney, and finished in Brazil – Luke, Ash, Calum and Michael have recently announced UK dates for their ‘Meet You There’ headline tour coming to the UK in October 2018. Full list of dates below. Tickets are available now via: https://5sosuk.lnk.to/TourPR

The band will join with fans to launch the album at two New York City events. Tonight, 5SOS team up with Apple Music for a screening of the short film On the Record: 5 Seconds of Summer, which offers a behind-the-scenes look at the making of the new album, and a special performance. Details are available HERE

The band returns to the Plaza for a performance that will be broadcast on NBC’s ”TODAY” show on Friday, June 22, as part of the 2018 Citi Concert Series.

MEET YOU THERE TOUR DATES