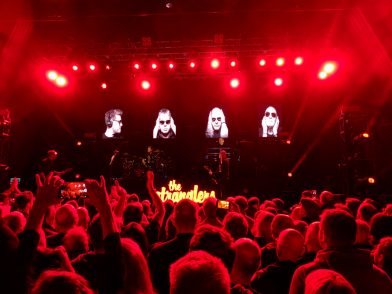 The Stranglers and Therapy kick ‘The Definitive Tour’ into high gear with their outstanding show at the UEA.

Therapy kicked off the night with a wave of noise featuring some of their best songs to date. Their dark grungey tone created the perfect prelude for The Stranglers’ wide range of talent.

The Stranglers opened their set with the iconic and eerily upbeat “Curfew”. Having only ever heard their songs through my cheap headphones that came with a Sony CD player, or listened to the tinny sounds coming from my smartphone, having the opportunity to not just listen, but feel their music for the first time was overwhelming!

The bass coming from the legend Jean-Jacques Burnel himself filled every part of my body, yet was so perfectly balanced with the rest of the group.

The Set continued with more cult classics such as “Grip” and “15 Steps”. “Bear Cage” was one personal highlight as it was such a joy to not only experience the songs first hand, but be able to witness the band perform with such ease. Watching the crowd react as The Stranglers played on their emotions was inspiring.

“Peaches”, unsurprisingly, caused the energy to increase tenfold in the room. The eager audience began to reminisce as they revelled in the popular funk of this hymnal punk anthem.

“Don’t Bring Harry” continued the wind down into the softer sounds of The Stranglers, with the on stage graphics constantly reflecting either their madness or their solidarity.

“Golden Brown” was by far my personal highlight of the night. This is a song I have followed for so many years, and it was clear that many people felt the same. Dave Greenfield on the Keyboards sent chills up my spine with the classic Harpsichord sounds.

Songs like “Enough Time” and “Something Better Change” caught the feeling in the room and rose it higher. Mosh-pits and headbangers were rife as the evening drew on. Through a sea of grey hair and balding heads, the mutual understanding that this was the best era of music, this was the best genre of sound and this was the best British band of them all.

With the event coming to a close, a chorus of wails and screams filled the air. Chanting for an encore, fans were delighted as the band burst back on stage. Jean-Jacques Burnel, showcasing his talent, sent thick waves of pure bass around the hall; rumbling the foundations I’m sure.

Going back to their roots with what was undoubtably their best work. “Go Buddy Go” and “No More Heroes” rocked the crowd and truly created a memorable night!

Both acts were beyond anything I could have imagined, and really captured the hearts of all that went. They are just the perfect match, with The Stranglers going all out to perform at their very best. I would not hesitate to see them again in a heartbeat.