Event: O.D.L (Our Dysfunctional Life) live tour coming to the UK this March! 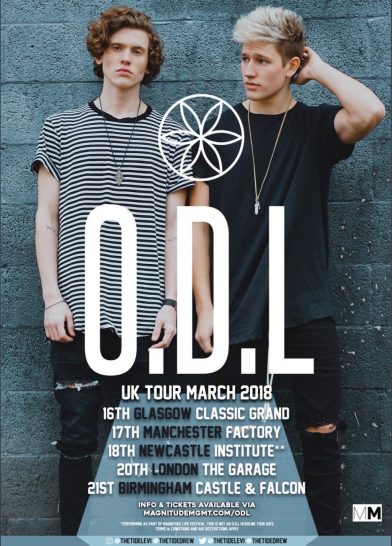 American EDM-Pop duo O.D.L are heading to the UK this March for five exclusive shows. Featuring Drew Dirksen and Levi Jones, who previously enjoyed success as part of pop-rock band The Tide, touring over 20 different countries during 3 world tours, playing in many sold out arenas.

Drew and Levi, from the East Coast and currently based in Ohio, now spend their time filming their daily life for a series of Vlogs for their channel and self produce all of their own music taking influence from the likes of The Chainsmokers, Twenty One Pilots, The Neighbourhood and All Time Low.

The duo promise to bring a very high energy live show with an immense amount of crowd interaction – fans do not want to miss out on this!

O.D.L will be in the UK for 5 exclusive shows brought to you by Magnitude Management including an appearance at Magnitude Live festival at the 1,500 capacity Northumbria Institute in Newcastle on 18th March alongside an incredible line up of emerging talent including X Factors Emily Middlemas, Joey Devries, Bailey McConnell, Mikey Bromley, Call On Sunday, Taken and The Verse.

Pre-Sale begins at 10AM on Saturday 27th January and is available to anyone who signs up to mailing list via www.magnitudemgmt.com/odl

General Sale begins at 10AM on Monday 29th January via www.magnitudemgmt.com/odl