Plan B and James Blunt to play Newmarket Racecourses this summer 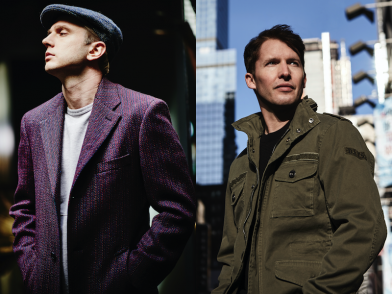 The Jockey Club Live and Newmarket Racecourses have announced Plan B and James Blunt as the next headliners for the 2018 Newmarket Nights season. BRIT Award winner, critically acclaimed director, actor, and musical maverick Ben Drew aka Plan B’s show will be part of some of his first UK summer shows in 4 years. Newmarket Nights favourite James Blunt returns after giving thousands of fans an unforgettable performance in 2014.

Plan B’s sophomore album, The Defamation Of Strickland Banks, achieved quadruple-platinum status, selling over 1.4 million copies in the UK alone, and hit the #1 album spot on release. It saw him win both a BRIT and three Ivor Novello Awards and includes the smash hit She Said. Following this, his 2012 directorial debut (and accompanying album) iLLManors saw him breaking boundaries with his creative style of overlapping stories and interweaving rap-narrative and saw Ben nominated for his fifth BRIT Award, nominated for his first Mercury Music prize, and once again hitting #1 in the UK album chart.  He will be releasing his eagerly anticipated fourth albumHeaven Before All Hell Breaks Loose on 14th April via Atlantic Records.

James Blunt is one of the most prolific British artists of recent times. His 2004 debut, the phenomenally successful ‘Back to Bedlam’, became one of the best selling albums in UK chart history, producing break-out hits ‘You’re Beautiful’, ‘Wisemen’ and ‘Goodbye My Lover’. He has since sold over 20 million albums worldwide and 12.8 million singles, with most recent album ‘The Afterlove’ becoming his fifth top 10 charting album. The album cycle saw him sell out arenas across Europe and join Ed Sheeran on tour in the United States and Australia.

James Blunt said;
‘I’m really looking forward to returning to Newmarket Racecourses on my tour. It will definitely be a highlight for me this summer.’

Plan B and James Blunt join the previously announced Craig David (20th July) and The Vamps who will be headlining the family-friendly Summer Saturday Live, 25th August 2018.