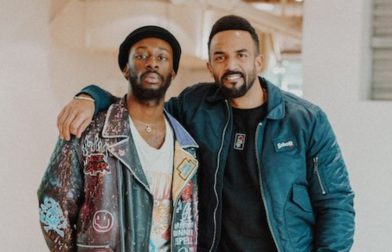 With the latest single, ‘I Know You’ Ft. Bastille, currently sitting at #2 in the iTunes Chart and on the A-list at both BBC Radio 1 and Radio 2, Craig premiere’s new album track, ‘Live in the Moment’ as he gears up to kick off his US tour, starting tonight in Miami.

Taken from his forthcoming seventh studio album, ‘The Time Is Now’ due for release on 26th January 2018 and features collaborations with JP Cooper, AJ Tracey, Ella Mai and Bastille, the brilliant new track, ‘Live in the Moment’, sees Craig team up with Grammy nominated US rapper and vocalist, GoldLink alongside acclaimed producer, Kaytranada who provides his unique genre-defying blend of soul, funk and R&B as the backdrop to this standout track.

On the track, Craig says, “This song is one that i’ve been so looking forward to dropping as it really sums up my outlook on life and how much I value Living in the moment as i’ve realised that’s where all the fun & magic is.

It was amazing to work with Kaytranada again as he always comes so correct with the beats, so when I heard this one I instantly fell in love with the groove & knew exactly what I wanted to talk about.

What made this record for me though was having the opportunity to work with such a talented rapper as GOLDLINK. Not only was the vibe incredible in the studio with G, but it was amazing to connect with someone I have been following for a long time now who is an amazing human being on & off the mic??

GoldLink says, “Amazing vibes all round. Very natural song process as well… I was never the type to work in a studio with someone. I’m more of a bedroom rapper, but the environment had such a home feel that I was comfortable enough to break out of my shell and make something I was proud of with a person who I deem as a legend. Craig is one of music’s greatest voices, and I’m honoured to be part of this album”

THE TIME IS NOW TRACKLISTING:

Magic
Heartline
Brand New
Going On
Love Me Like It’s Yesterday
For The Gram
Get Involved –  feat. JP Cooper
I Know You – feat. Bastille
Live In The Moment – feat. GoldLink
Love Will Come Around
Somebody Like Me – feat. AJ Tracey
Focus
Deluxe