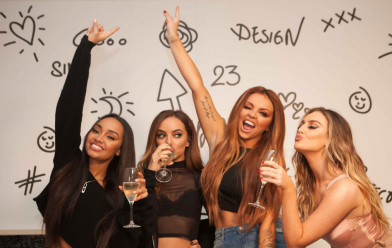 Glory Days, Little Mix’s double-platinum fourth studio album, has been the band’s most successful to date. Originally, released in October 2016, the album spent a total of five weeks at No.1 in the UK, the most for a girl group since the Spice Girls in 1997 It is the biggest selling album by a female group this millenium in the UK, as well as the group’s fastest selling album to date. The Platinum Edition, released last week, went straight into the charts at No.3.

Spawning numerous hit singles, including Touch, No More Sad Songs and Power, Glory Days’ first single Shout Out To My Ex spent three weeks at the top of the Official UK Chart and has now sold more than 1.1 million copies in the UK alone. Shout Out To My Ex also won the Best British Single at the BRITS, giving Little Mix their first ever BRIT Award. Earlier this week, Little Mix were also named the UK’s Most Watched VEVO Artist of 2017 with more than 189,000,000 views in the UK this year.

Little Mix’s 2017’s Glory Days Tour, which ended last month at London’s O2 Arena, followed on from the phenomenal success of the Get Weird Tour in 2016. Having sold more than 800,000 tickets in 2017 alone, the group’s shows have been the biggest UK Arena tours for the last two years. A new 2018 tour The Summer Hits Tour was announced last week.