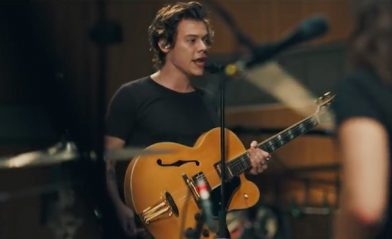 Following the release of ‘Harry Styles: Behind The Album’ on Apple Music, the performance of ‘Kiwi’ from the Fulwell 73 produced documentary is now available to watch in full.

Watch the full performance of ‘Kiwi’ (Live in Studio) here:

‘Harry Styles: Behind the Album – The Performances’ is out now only on Apple Music: http://smarturl.it/HS-BTA-Performances?iqid=KiwiLive The film sees Styles performing all 10 tracks from his full self-titled debut and is an extended look into the performances from ‘Harry Styles: Behind the Album,’ which premiered on Apple Music earlier this year: http://smarturl.it/HS-BehindTheAlbum?iqid=KiwiLive Harry Styles’ self-titled debut album is available now: http://hstyles.co.uk/music

‘Harry Styles: Behind the Album’, a film from production company Fulwell 73, chronicles Harry’s musical journey while creating his much anticipated debut solo album. The film features exclusive interviews and behind the scenes footage shot in Jamaica, Los Angeles and London during the making of the album, and is complemented by Harry and his band performing songs from it for the first time at the world famous Abbey Road Studios in London.

Harry Styles released his first piece of solo music with his self-titled debut album Harry Styles in May 2017. The 10-track album features the platinum single ‘Sign of the Times’ and current single ‘Kiwi’.

The album made history in the U.S. with the biggest debut sales week for a UK male artist’s first full-length album since Nielsen Music began tracking sales in 1991, topping official charts at #1 in more than 55 countries.

Following the album’s release, Styles made his acting debut in Christopher Nolan’s critically acclaimed film Dunkirk in July 2017. Dunkirk topped the US box office in its first weekend and was one of the top grossing films of the summer, rounding off an incredible year for Styles as the first British artist with a #1 debut single, album and film in the same year.

Styles is currently on his sold-out 2017 world tour, Harry Styles Live on Tour, which kicked off with intimate venues and will expand to arenas in 2018.