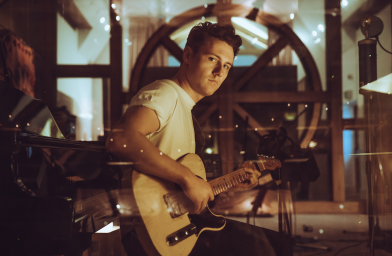 ‘Miracle’ is a cinematic and empowering offering, showcasing the effortless way in which Callum mixes his emotive cracked vocals with an infectious, euphoric sound and relatable lyrics, intertwined with rich textures and chiming keys.

‘Miracle’ is the sound of Callum’s songwriting talents maturing, as he follows in the footsteps of Coldplay, Paolo Nutini and Hozier.

Speaking about the track, Callum says: “Like most of my songs “Miracle’ is autobiographical. It’s about my journey of escaping my old life in Scotland, breaking free and trying to make something of myself. I wrote it about all the obstacles we all face in everyday life and no matter how difficult things get I believe we can always find a way around them. It’s a really positive message.”

‘Miracle’ is taken from Callum’s upcoming sophomore EP of the same name, set for release on January 19th. The six track foot EP oozes confidence and a maturity beyond his years from the beginning.

A musician with a broad sonic palette, Beattie takes inspiration from the likes of CHVRCHES, Biffy Clyro, Sia and Kings Of Leon.

Having risen stealthily through the ranks over the last year, Beattie has already supported the likes of James Arthur, Clean Cut Kid, Fickle Friends and James TW, building a committed cult fanbase.

The culmination of a year’s work is now starting to pay serious dividends, with over four million streams for his debut EP ‘We Are Stars’, Beattie continues to go from strength to strength.

This year saw him added to the A List at BBC Radio 2, hit the number one spot on the itunes Singer-Songwriter Chart, feature (twice) on electronic heavyweight High Contrast’s album ‘Night Gallery’ and perform at a plethora of UK festivals including Glastonbury, V Festival, British Summer Time, Boardmasters and The Great Escape Festival.