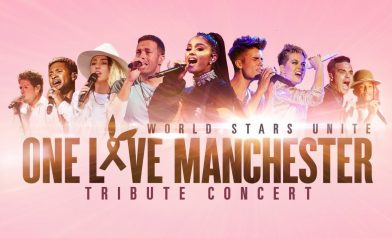 It’s now the biggest non-sporting live programme in BBC iPlayer’s history, with 1,078,000 requests to watch, even more than the Opening Ceremony of the London Olympics 2012, the previous record holder.

The event saw Ariana Grande perform at the Emirates Old Trafford Cricket Ground to honour and raise funds for the victims and families who were tragically affected by the Manchester attack following her show on Monday 22nd May. She was joined by some of the biggest names in pop, including Justin Bieber, Coldplay, Katy Perry, Miley Cyrus, Pharrell Williams, Take That, Niall Horan, Little Mix, Robbie Williams and Black Eyed Peas, with a surprise appearance from former Oasis singer Liam Gallagher.

One Love Manchester was produced by BBC Studios, the BBC’s commercial production arm. The complex piece of television coverage was expertly put together in just one week by the Entertainment, Music and Events team, broadcasting to over 50 countries around the world and watched in the UK by a peak of 14.5m on the night, making it the most-watched TV show of the year so far. It was presented by Sara Cox and Ore Oduba, with Nick Grimshaw and Anita Rani hosting from backstage and in the crowd.