Busted announce new single Thinking of You and tour video 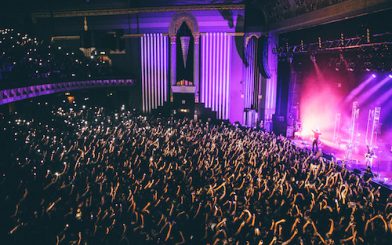 Pop-trio Busted have announced the release of their latest single ‘Thinking of You’ which is available to stream and download at Spotify and iTunes now.

Taken from their new album Night Driver – their first in twelve years together – the new single follows previous tracks – the disco-tinged ‘On What You’re On’ and anthemic fan favourite ‘Coming Home.’

Charlie said, “‘Thinking Of You’ is the most feel-good song from our new album, and it’s about not being able to get the person you’ve fallen in love with out of your head. It’s got tons of energy so it’s an absolute belter to play live. Can’t wait to play it out on our tour soon!”

Due to popular demand, the band’s Night Driver Tour now has a selection of additional dates which kicked off at Norwich’s NEA on 28th January.

Now 24 performances in total, the band are playing prestigious theatres across the country​​
including an electric set at
London’s Hammersmith Eventim Apollo last Friday. Watch a teaser trailer here.

James, Matt and Charlie first broke onto the music scene in 2002 with their tongue-in-cheek ode to Matt’s school teacher Miss MacKenzie, ‘What I Go To School For.’ Within just two years the three-piece had become the biggest band in the country, with four number one singles, two triple platinum albums, a total of five million records sold, and over 750,000 ticket sales including and a record-breaking run of thirteen Wembley Arena shows.

Tickets – http://www.livenatio n.co.uk/artist/busted-tickets
Night Driver is out on now via East/West Records.