‘The Beatles: Eight Days A Week – The Touring Years’ trailer out now! 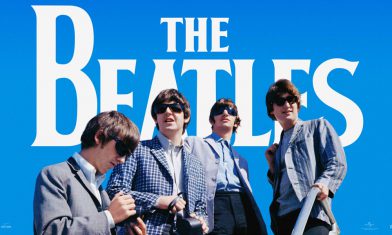 Get your own backstage pass with The Beatles: Eight Days A Week – The Touring Years, on Blu-ray, DVD & 2 Disc Special Edition from November 21st. The Special Edition has 100 mins of extras including; unseen interviews with Paul and Ringo, five rarely seen full-length performances of The Beatles live in concert, plus a 64-page booklet with rare photos from The Beatles’ private archive – a must-own for all fans!

After their legendary North American television debut on “The Ed Sullivan Show” in 1964, The Beatles transfixed the U.S. and the tremors were felt worldwide, transforming music and pop culture forever with their records and television appearances. The Beatles’ extraordinary musicianship and charisma also made them one of the greatest live bands of all time.

The first feature-length documentary authorized by The Beatles since the band’s breakup in 1970, Eight Days A Week features rare and never-before-seen archival footage of shows and interviews, plus new interviews with Paul McCartney, Ringo Starr and numerous prominent observers. The film captures the exhilaration of The Beatles’ phenomenal rise to fame as well as the toll it eventually took on the band members, prompting them to stop touring altogether in August 1966 and devote their prodigious musical energy to the series of groundbreaking studio recordings for which they are best known today.

Featuring a wealth of specially created supplementary material totaling 100 minutes of extras, the deluxe home entertainment editions contain exclusively created featurettes for fans to delve even deeper into the band’s world.  Accompanying these are stunning, fully restored full-length performances of some of the band’s most iconic tracks including “Twist and Shout” and “She Loves You” recorded at the ABC Theatre, Manchester in 1963 and “Can’t Buy Me Love” at the NME Awards, 1964, in London, bringing the experience of seeing The Beatles in concert fully to life for all fans.