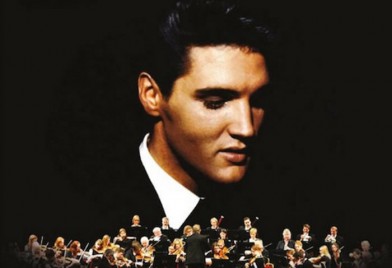 Following on from the release of last year’s incredible million-selling album, If I Can Dream, comes the announcement of the world exclusive live concert experience featuring the most recognisable voice of all time, Elvis Presley, backed by the legendary Royal Philharmonic Concert Orchestra, for a six date UK arena run this November.

The critically acclaimed album, If I Can Dream, uses archive recordings of “The King’s” voice featuring new orchestral arrangements of some of his biggest hits, to create an overwhelmingly encapsulating and enthralling album.  The album is Elvis’ twelfth UK number one album and his fiftieth to hit the UK top-ten.

Now fans will have a chance that many have never had before – to experience the man who changed the course of popular music – the biggest selling solo artist in history (having sold an astonishing one billion records world wide), live on screen, with the Royal Philharmonic Concert Orchestra live on stage performing the King of Rock and Roll’s most well-known “rocking” songs and his tender, heart-wrenching ballads.

If I Can Dream was produced by Executive Producer, Don Reedman, Priscilla Presley and Elvis Presley Enterprises. Priscilla Presley will be also be making a very special appearance at the arena shows. She commented, “What an honour for me to present for the live debut of what has become a very prestigious and beloved album along with other favourites backed by a full symphony orchestra.”

These one-off UK performances will be a musical celebration of the legend for whom superlatives weren’t enough and who continues to break records.

Tickets available from ticketline.co.uk, songkick.com and all venue box offices