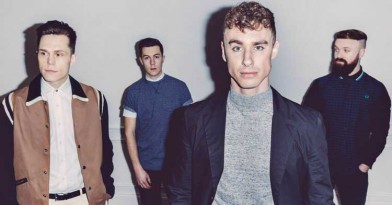 Don Broco have been announced as main support to the Australian pop rockers 5 Seconds Of Summer on their ‘Sounds Live Feels Live’ tour of the UK and Europe.

The Bedford four-piece will join 5SOS at Cardiff’s Motorpoint Arena on April 15th for a eight-date run in the UK, which finishes at The SSE Arena, Belfast on April 25th. The band will then play 23 European dates, starting in Dublin on April 26th and finishing in Cologne on June 8th.

With beefy riffs propping up their hooky choruses, Don Broco also cater for the hardcore pallet and will also be the main support to Bring Me The Horzion on a nine-date European tour in April that precedes the 5SOS tour. The band will start their run with BMTH in Brussels on April 5th and finish in Paris on April 14th.

Don Broco will also be playing this year’s summer festivals, including Download Festival in June and Teddy Rocks Festival in Dorset, which the band headline on April 30th.

Last year Don Broco cemented themselves as one of Britain’s most important rock bands with the release of their second album Automatic, which entered the UK Album Chart at No.6 and spawned the singles ‘Automatic’, ‘Superlove’ and ‘Nerve’.

The band also completed a major sold-out UK headline tour in support of the release, which culminated in the band’s biggest headline show to date at Brixton Academy.