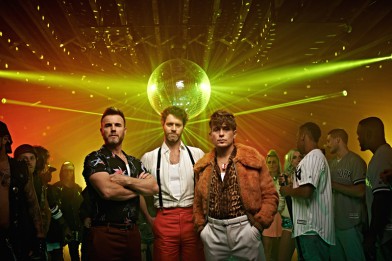 Take That will unveil the exciting new video for their latest single ‘Hey Boy’ on Vevo on Tuesday 3rd November at 8am. The single (available now) features on the 2015 edition of their Number One hit album ‘III’ due for release on November 20th through Polydor Records.

Gary, Mark and Howard go all out “Saturday Night Fever” in full 70’s style for the ‘Hey Boy’ video as they ride through the streets of New York on chain handle choppers before venturing into an underground club scene amidst flashing lights, disco balls and dance-offs. The single itself is another Take That smash; chunky synths and a huge chorus that is already getting a similar reaction from fans of their upbeat Number One hit ‘These Days’.

The release of this video comes as Take That prepare to release the ‘Take That – III – 2015 Edition’ which will include an additional three unheard tracks together with the live DVD of their recent UK tour Take That Live 2015, giving fans a front row seat perspective to relive the experience.

Listen to a snippet of Hey Boy here:

Take That’s tour DVD’s are an event in themselves with their previous releases having broken every sales record going in the UK. Their latest DVD of their most recent UK Tour ‘III’, was filmed at the O2 earlier this year and shows their spectacular live production in its full glory; a wonderful, colourful explosion with everything from dancing jellyfish, beautifully choreographed puppetry and a contemporary dance routine performed by Mark and Howard to a flying tandem sidecar that soars out over the crowd, a burning globe, pyros, fireworks and indoor rain.

‘III’ which went straight to Number One at the end of 2014 marked another poignant moment in the band’s legacy as a newly created three-piece. The album includes the band’s most recent hits ‘Get Ready For It’ written for the blockbuster Kingsman and ‎No.1 hit ‘These Days’.‎

Last month Take That also played ‎their first ever Apple Music Festival show at the Roundhouse, which follows on from shows earlier in the year for War Child, Wear The Rose and their first festival, CarFest.

Take That have had seven UK Number One albums, 12 UK Number One singles, sold over 45 million records, won six Ivor Novellos, eight BRITs and sold over seven and a half million concert tickets in their lifetime.