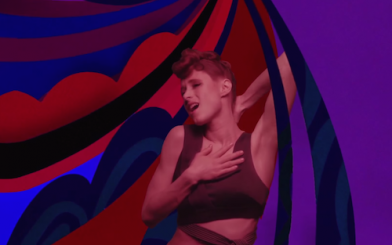 This week sees the release of Finding Neverland The Album. Get it here! The official musical companion to the acclaimed Broadway production of Finding Neverland sees music’s top stars reimagine the show’s songs. Kiesza’s music video for “Stronger”, has premiered on VEVO. Watch it below:

Today sees the star perform the song on ABC’s Good Morning America. Yesterday, she joined cast member Matthew Morrison at a special in-store event at Macy’s Herald Square in Manhattan, New York where Morrison introduced her live performance of “Stronger” at the store for fans.

The full tracklisting is below and check out more at www. FindingNeverlandTheMusical. com/music.

Based on the Academy Award-winning motion picture by David Magee, and the play The Man Who Was Peter Pan by Allan Knee, Finding Neverland  follows the relationship between playwright J. M. Barrie and the family that inspired Peter Pan, or The Boy Who Wouldn’t Grow Up – one of the most beloved stories of all time.  Starring Matthew Morrison (“Glee,” South Pacific), Kelsey Grammer (“Frasier,” La Cage aux Folles) and Laura Michelle Kelly (Mary Poppins), the production is directed by Tony®-winner Diane Paulus (Pippin, Hair)with book by Olivier Award®-nominee James Graham, music and lyrics by multi-award winning singer songwriter ‎Gary Barlow (Take That) and Grammy Award®-winner Eliot Kennedy, choreography by Emmy Award®-winner Mia Michaels (“So You Think You Can Dance,” Cirque du Soleil’s Delirium), this new musical, packed with mesmerizing visuals, irresistible songs and plenty of laughs, is a timeless story about the power of imagination… and spectacular proof that you never really have to grow up.  For more information, please visit www. FindingNeverlandTheMusical.com .