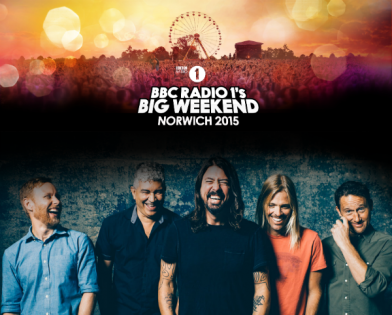 On this morning’s BBC Radio 1 Breakfast Show, Scott Mills announced the line-up for Radio 1’s Big Weekend 2015, taking place at Earlham Park, Norwich on 23 and 24 May – including Foo Fighters and Muse who will headline the event.

Some of the hottest UK and international acts will join them to perform at Europe’s biggest free ticketed festival which brings the whole nation together for one weekend of amazing live music.

Joining headliners Muse to perform on the Main Stage on Saturday 23 May alongside the already announced Florence + The Machine are 5 Seconds of Summer, David Guetta, Ben Howard, The Vaccines, Fall Out Boy and Charli XCX.

Alongside Foo Fighters, who will headline the Main Stage on Sunday 24 May and Taylor Swift who has already been announced, Sam Smith,Rita Ora, George Ezra, Clean Bandit, Olly Murs and Imagine Dragons will also perform.

Snoop Dogg, Rudimental, Jess Glynne, Hozier, Years & Years, Ella Eyre, Slaves, Mallory Knox and Circa Waves will all perform on Saturday 23 May on the event’s In New Music We Trust Stage.

On Sunday 24 May, the In New Music We Trust Stage will host performances from Jamie T, Alt-J, Sigma, Catfish & The Bottlemen, Jungle,James Bay, SOAK, Raury and Lower Than Atlantis.

Matt Bellamy from Muse said: “I’m very excited to play. The last time we played Big Weekend, for us it was a disaster, so I can’t wait to make up for it on this performance. I’m really looking forward to coming back and doing a great show. I’m pretty sure that we may unveil another new song that we will play for the first time which is pretty exciting.”

Dave Grohl from Foo Fighters said: “I’m really excited – I can’t wait to come out. I don’t really think we’ve ever played there before so I’m looking forward to it.”

Jess Glynne said: “My first Big Weekend in my own right and what a line up to be a part of. I can’t wait to play Norwich with my band and let you hear some of the songs from my new album. It’s going to be big.”

The line-up for the BBC Introducing Stage will be announced in Huw Stephens’ show.

50,000 tickets for Radio 1’s Big Weekend 2015 were snapped up last month in 40 minutes, and as with previous years, the majority of tickets were reserved for those living in Norwich and the surrounding areas.

Radio 1’s Big Weekend is now in its 12th year and will be produced in partnership with Norwich City Council.