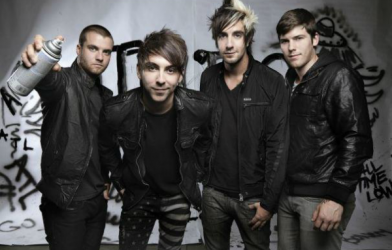 All Time Low visit HMV to sign limited edition slipcases for their new album ‘Future Hearts’ ahead of its release on April 6th. A hmv exclusive edition of the album will be available in all stores.

Lead single ‘Something’s Gotta Give’ premiered on BBC Radio 1 this January. Frontman Alex Gaskarth said of ‘Future Hearts’ to Rock Sound “It feels like a definite progression. I wouldn’t say it’s an insane departure or anything like that. We haven’t gone completely the other way and tried all kinds of new things. We’ve certainly tried some new things, but I don’t think it’s necessarily going to alienate anyone or push people away that loved the last record. There’s a lot of stuff that’s in line with Don’t Panic, but there’s a lot of stuff that’s a logical next step from it too.”

All Time Low hit the road in February sharing the stage with the likes of You Me At Six, Fall Out Boy, SlipKnot and The Smashing Pumpkins. They play a headline show at Wembley Arena on March 20th with support from Neck Deep and Real Friends.