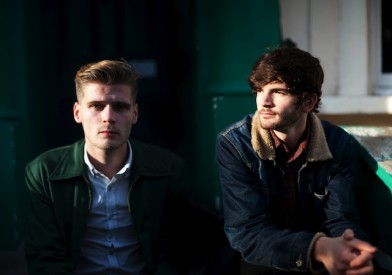 Hudson Taylor will release their new single World Without You through Polydor Records on March 30th, preceding the release of their debut album Singing For Strangers.

The Dublin duo, brothers Harry and Alfie, have amassed a huge underground following over a series of well-received EPs and singles and the 18-track album is a perfect honing of their breezy, beguiling folk-pop. “We want to be able to look back in a few years’ time and be proud of our songs,” says Alfie. “Our music is raw and folky, like Crosby, Stills and Nash or Simon & Garfunkel. We’re really coming into our own and we’ve been recording some great stuff,” adds Harry. The pair have also announced a mammoth UK and Irish tour to take place throughout February.

They have certainly been hanging round in the right circles: they supported Jake Bugg on his arena tour earlier this year and ended up performing twice in one day when they played with the Rolling Stones in Hyde Park.

Harry and Alfie spent the majority of 2014 putting the finishing touches on Singing For Strangers, which follows the critically-acclaimed singles Chasing Rubies, Battles and Weapons. The record was produced by the band and long-term collaborator Iain Archer with help from Mike Einziger and Danton Supple in London, LA & Eastbourne.

Over the course of their EP and single releases, Hudson Taylor have garnered a dedicated following and their Youtube and Vevo videos have had almost five million views.

February and March will see the band play some of their biggest headline slots yet, with the tour including dates at London’s Shepherds Bush Empire and Dublin’s Olympia Theatre. The band’s live shows have been met with an increasingly fevered reaction. “We want to be known as a live band,” says Harry. “We plan on touring constantly – forever.” Hudson Taylor are on the brink of a big breakthrough. The stage is set.