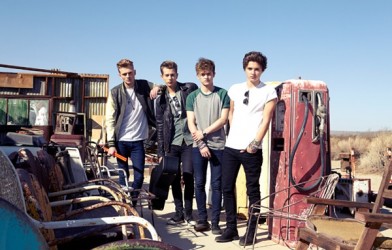 As the lights flicker and the music starts to build, you can tell that British four-piece The vamps have some genuinely excited and dedicated fans, some of which have been camping out since 2am or perhaps even earlier. It gives a sense of how far they have come since their early youtube days, and how much their fanbase has grown.

Last minute support act ‘Masketta Fall’ hypes up the crowd and has them tingling with excitement as they play their original songs ‘Parachute and current cart favourite ‘Summertime Girls’ along with a few covers.

When The Vamps take to the stage you can almost taste the excitement in the air, as their loyal fans scream their lungs out in excitement. They kick off the show with crowd favourite ‘Wildheart’ and set the show up with a great start, and continuing on with catchy tune ‘Girls on TV’.

Never forgetting their beginnings, they play a mashup of many of the songs that gave them their start, which had the crowd jumping for the joy. The show continued on with definite crowd favourites such as ‘Somebody To You’ and ‘Last Night’.

The band soon swapped instruments, Brad jumped behind the drum kit, Tristan grabbed a guitar and Connor did and impressive job of lead vocals in a cover of All Time Low’s ‘Dear Maria (Count Me In)’. It soon becomes evident that the band isn’t as clean cut as some people may think, introducing their much loved song ‘On the Floor’, “This song is about sex, we hope you enjoy!”.

A definite highlight of the show would be drummer Tristan Evan’s impressive drum solo, which ha the crowd gaping in open-mouthed disbelief.

The band performs a cover of ‘Teenagers’ by My Chemical Romance, which has the crowd screaming along, and finishes their set with a crowd sing-a-long of ‘Oh Cecilia (Breaking My heart)’.

The crowd evidently wasn’t ready for the show to come to a close, screaming, yelling and making as much noise as possible, until the band returns to perform two final tracks. ‘Shout About It’ has the crowd bringing out their phone lights and singing along with happy grins on faces, before they finish off with their debut single ‘Can We Dance’ in which the crowd jumps and screams like crazy.