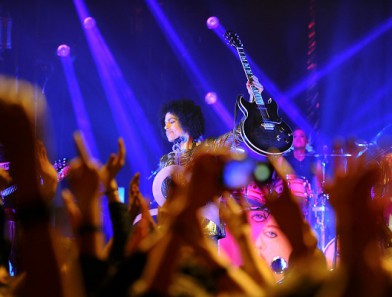 Prince & 3RDEYEGIRL tore up London yet again last night, February 2nd 2015, as they played a joyous set for a private charity event at the historic venue KOKO in Camden Town.

Re-visiting the scene of one of their triumphant ‘Hit and Run’ shows from last year, Prince and the band (guitarist Donna Grantis, bassist Ida Nielsen and drummer Hannah Ford-Welton) took to the stage to play an astonishing set that turned KOKO into a massive Monday night party. At the organizer’s request, Prince and the band delivered an awe inspiring greatest hits collection to a rapturous reception from the capacity crowd.

The enigmatic icon and his band arrived from America just yesterday for a whistlestop visit to the UK especially for the one-off show held in aid of the Autism Rocks charity. Taking to the stage at 10pm the band played for over two hours with Prince setting fire to the stage from the get-go, launching into a roof-raising version of Purple Rain which set the tone for the evening ahead. Playing hit-after-hit the band were joined on stage by Joshua Welton (keyboards) and Liv Warfield (vocals).

Classics performed included Controversy, Lets Go Crazy, U Got The Look, 1999, Nothing Compares 2 U and Kiss, many complete with incendiary guitar solos and breathtaking instrumental breaks as the band showed their incredible musicianship song after song. Also included was a heart-wrenching rendition of Paloma Faith’s Only Love Can Hurt Like This featuring Liv Warfield.

Prince then moved on to keyboards and mixing duties spinning a turbo charged mini-set that included When Doves Cry, Sign of the Times, Hot Thing and Love Bizarre.

Returning to the front of stage he led the band in tracks from their acclaimed new albums including The Breakdown from ART OFFICIAL AGE (Prince’s solo album) and the title track of the 3RDEYEGIRL album PLECTRUMELECTRUM.

The set was a top-to-bottom masterclass in the very best of Prince – incredible singing, electrifying guitar playing, breathtaking showmanship and some serious dance moves!

This was the first UK show of 2015 following last year’s series of spontaneous ‘Hit and Run’ shows announced at the 11th hour via Twitter. Legendary venues included Ronnie Scotts, Electric Ballroom and Shepherds Bush Empire, with the band often playing up to three shows in one night. This was followed by ‘Hit and Run 2’ which saw the band blow up arenas across the UK and Europe with further surprise club shows in the mix.

The Guardian said it best, describing the Electric Ballroom shows in this way: “These are performances by one of the greatest funk-rock bands ever.” The group has been showered in 5-star reviews from all major reviewing media.